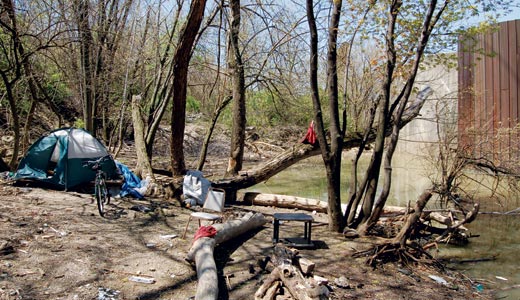 Before living in a $20 tent, Joe Kortz was a successful entrepreneur who owned a vinyl siding company and a commercial shrimp boat in Louisiana, earning nearly $100,000 a year.

“But bad luck, a worse choice of women and living a crazy life — now I’m with nothing to show for it,” says the 48-year-old Louisville native.

In 2001, his truck was stolen, along with valuable construction equipment. Soon after that, subcontracts from construction jobs began drying up. Almost broke, Kortz turned to drugs to numb the economic woes.

Two years ago he was arrested for possession of crack cocaine and served 14 months in prison. With little money upon his release, he caught a Greyhound back to Louisville, where for eight months he lived in a tent at a homeless camp near Middletown.

But then a few weeks ago, he says police cleared the camp, shredding his tent in the process.

Since then, a handful of homeless individuals have told advocates that police and parks department employees are tearing down their camps and destroying the tents they call home. But with no witnesses willing to file a formal complaint, their claims have gained little traction.

In response, city officials say they only clear homeless camps if they are a deemed public nuisance, and they deny shredding or burning tents and other makeshift homes.

Pouches of tobacco rolling papers, candy bar wrappers and empty malt liquor cans are sprinkled in the high grass along the western shore of the Ohio River, a sign that a “tent city” is not far away. Such homeless camps can be found along the riverbanks, inside parks and under viaducts, according to David Dumont, co-founder of Not Forgotten Ministries, a homeless advocacy group.

In recent weeks, Dumont says, almost a dozen homeless people have told him that without notice, Metro Police officers and Metro Parks officials have burned or cut up their tents.

Earlier this month, the advocate filed a complaint with MetroCall and contacted Metro Police about the allegations. Responding to Dumont’s complaint via e-mail, Assistant Chief Philip Turner acknowledged police recently cleared two downtown camps for public safety reasons, and in both situations they gave inhabitants a week’s notice.

In the e-mail, the assistant chief went on to say he had not heard any reports of officers shredding tents.

In a telephone interview with LEO Weekly, Turner insists officers are sensitive when dealing with the homeless.

“If they are not committing a crime, there’s little contact with police,” he says. “We’re aware of where they set up these tents and camps. What I encourage our officers to do is to make sure we know what’s going on in case of criminal behavior. Unless it is a criminal problem, we try to manage it and often work with it.”

If Metro officers acted inappropriately, Turner says the department would investigate. But because Dumont’s complaints do not include specifics about the date or location of the alleged incidents, an investigation would be difficult.

In an e-mail sent to LEO Weekly, Jason Cissell, spokesman for Metro Parks, says officials with his department could not find any evidence that employees were involved in such an action. Typically, he says the parks department only removes tents once it’s clear they have been vacated.

“Our intention is to handle these situations humanely,” Cissell says, “while ensuring the safety of our park users and compliance with local laws.”

In an effort to avoid conflict, Metro Police and Metro Parks officials coordinate with social-service agencies when dealing with homeless camps.

For instance, when city officials learn of an encampment, they might contact Seven Counties Services — a nonprofit mental health organization — to respond in an attempt to persuade individuals to accept assistance.

Marlene Gordon, executive director of the Coalition for the Homeless, says the cooperative system is not perfect, but the efforts are beneficial.

The coalition — which represents 29 homeless agencies — dispatches outreach teams to alert those living outdoors when a camp will be cleared.

Walking through the heavy rain, Kortz’s clothes are soaked and dotted with white paint. Last week he found temporary work, making $80 a day painting houses. It’s not much, but he hopes to save enough to pay for a motel room. In the meantime he panhandles, holding a sign: “Homeless, Hungry, Please Help. Thank you, God bless.”

Since buying a new cheap tent from Walmart, he still lives outdoors, near Preston Highway. Although the shelters offer excellent services, Kortz says they present a temptation to return to drugs. More than once Kortz says he has witnessed people drinking and smoking crack inside shelter bathrooms.

“For anybody in a bad situation, you can’t go hungry in Louisville,” he says. “If you got TARC fare, they’ve got clothing, food and shelter, but there’s a lifestyle you have to put up with.”

Since being released from prison Kortz has relapsed twice, but he’s learned enough to know the addiction was a major culprit for his current troubles.

“I admit, I put myself in this situation with a bad choice of living,” he says. “Now I’m totally off that shit and don’t want to be around it. It screwed my life up.”

Wiping at a deep red gash across his nose, stuffing his wet hair under a baseball cap and pushing his hands into his front pockets, Kortz walks off. The rain has stopped.