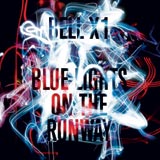 You’ve got to hand it to Bell X1 — most groups would have broken up after being dumped by Damien Rice. But Bell X1 has soldiered on, releasing four albums and getting their fair share of praise from native Ireland. Blue Lights on the Runway features the band’s second lineup since Rice’s departure. It’s pretty easy to see how Rice could have fit into this lineup. After the keyboard fetish in first couple tracks, Bell X1 returns to a form that’s been well worn by other Irish groups like The Frames: Sing earnestly about girls over nice guitar parts. Unfortunately, Bell X1 didn’t take the lead from Glen Hansard and strip their songs down. There’re a lot of bells and whistles attached to the melodies that don’t serve the songwriting. On “Light Catches Your Face,” they offer up a gem. Unfortunately you have to wade through the rest.