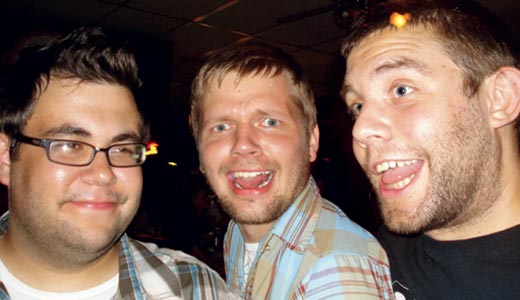 Vinyl in the ’Ville
Vinyl sales were up in 2008 to the tune of 1.88 million, according to Nielsen Soundscan, which has tracked sales of the format since 1991. On Thursday, April 16, ear X-tacy and local turntable company Crosley will focus on vinyl’s listeners, not the numbers.

For one hour beginning at 7 p.m., customers can bring their favorite records to ear X-tacy (1534 Bardstown Road, 452-1799) and take turns playing them for friends and complete strangers. Turntable stations will be set up around the store for personal listening, and all vinyl will be for sale at 20 percent off. With the vinyl purchases, Crosley will offer chances to win one of six of their vintage-style turntables.

The Louisville Photographic Booth Company will be on hand to shoot “sleeve-face”-style pics that cover certain parts of the body, depicting you as part of the album cover.
“We’re hoping the community really gets excited about this event,” says Bo LeMastus, president of Crosley Radio. “Not only is it something that caters to the growing population of vinyl enthusiasts, but it also helps get the word out that Louisville is host to one of the greatest independent record stores in the country, as well as one of the top turntable manufacturers in the country.”

The first round takes place at select Hard Rocks, including Louisville’s. In the next round, one winner from each participating city will be evaluated by a panel of artists and music industry professionals, who choose the finalists. The panel includes Head Judge Little Steven Van Zandt of the legendary E Street Band and Darryl “DMC” McDaniels. Fans vote in the final stage online at hardrock.com between May 25 and June 6. Visit hardrock.com for more details.

Music ’Cast
Hitchhike, hailing from Austin, Indy and now Louisville, join us in the LEO offices Wednesday. Listen up at Bluegrass Catastrophe, bluecat.leoweekly.com.