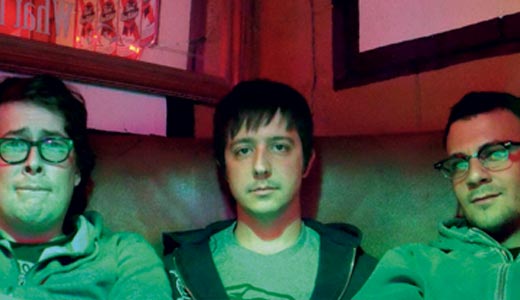 Heavy Hometown, welcome to Louisville. Corey, Eric and Jon weigh in on navigation, prosthetic wings and which rocker rhymes with Indianapolis.

LEO: Be honest. How many times have you asked for directions?
Corey: Asking for directions is a sign of weakness. I never do it, because I’m strong and know where everything is.
Jon: As a band, we take all direction from Corey. He’s like a horse on vitamins.

LEO: How much do prosthetic wings cost?
Corey: Oh, I imagine a good pair will set you back at least $1.20.
Eric: Yeah, the “angel” kind with swan feathers. The pixie-raver style is much more affordable, I think.

LEO: Did you, at one point, consider playing music for money?
Corey: Not really. We all get super-paid at our day jobs. We’re all dentists.
Eric: I’m not a dentist.
Jon: We’re a part of the stimulus package now, so … we’re good.

LEO: How many times have you been asked what high school you attended?
Eric: Last fool that asked me that question got …
Corey: Eric!
Jon: Let’s just say … he didn’t ask again!
Heavy Hometown: Ha ha ha ha ha!

RIP
We are saddened by the news that Dave Ernspiker, singer and guitarist for the band Big Rock Show, passed away suddenly last week.

If you have any pics or memories of Dave for posting on our music blog, Bluegrass Catastrophe, please e-mail them to [email protected]
Puckers (4041 Preston Hwy., 364-7250) will host a benefit concert Saturday, April 18. Showtime is 7 p.m., $10 with proceeds going to the Dave Ernspiker Memorial Fund.

Music ’Cast
The surviving members of Big Rock Show join us to relay their memories of guitarist and singer Dave Ernspiker. Listen at Bluegrass Catastrophe,  bluecat.leoweekly.com.