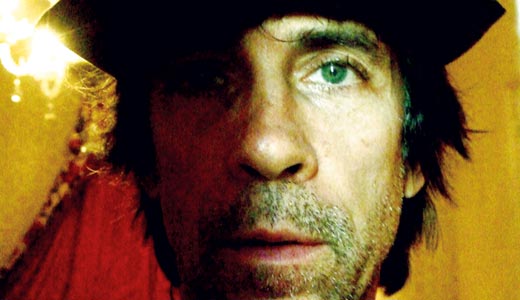 Birmingham, Ala., native Anthony Crawford has a rarified perspective on his current travels. You would too if you were Neil Young’s guitar player.

Crawford hooked up with Young and his band The Shocking Pinks in 1983 after one of Young’s producers, Elliott Mazer, heard Crawford’s backup vocal on a Tanya Tucker song. He’s backed up Neil ever since, taking the album cover photo for Chrome Dreams II, and spending quality shows with Steve Winwood and Dwight Yoakam.

Now, the songwriter, who has a home in Floyds Knobs, is releasing a solo album, Five Is Red, May 10. Crawford enlisted the help of Everest (featuring onetime Louisville resident Russ Pollard) and My Morning Jacket keyboard player Bo Koster.

Speaking by phone from a stop in London, Ontario, Crawford said he basically handed over the keys to his collaborators.

“I sent them 35 or 40 songs that I had written, and I let them pick the songs,” he said. “They produced it to where I would’ve never thought of doing some of the things they did. It doesn’t sound like they came in as a session. You can feel the love coming off of it.”

Crawford is promoting Five Is Red, named after his least favorite color and his favorite number, to local radio stations while he’s out with Young.

“It doesn’t hurt to have Neil Young as a calling card.”

Music ’Cast
The programmers behind the scenes at this weekend’s South By South End Festival stop in. The second annual 18-and-over art and music showcase takes place April 24-25 at Shooter’s (7092 Distribution Drive). Listen on our blog at Bluegrass Catastrophe, (bluecat.leoweekly.com).