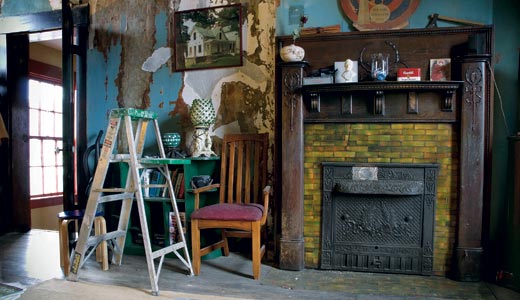 Art shows should have more cookouts.

I’d like to say that I am always lured to art galleries for loftier purposes, but it was the free burgers that got me in the door of the Hite Art Institute last Thursday. Forget boxed wine and cheese cubes — hot dogs and sheet cake are without a doubt the proper brain food for BFA shows. There must be a natural ingredient in potato chips that curbs the temptation to act like a dilettante.

The Allen R. Hite Gallery was packed with burger-gobbling art lovers and others for the opening of the Bachelors of Fine Arts Graduation Show last week. The gallery, on U of L’s campus, hosted the debut to celebrate the accomplishments of this batch of fine artists and give them an opportunity to have a formal exhibition all together.

A procession of photographs lined a cool white wall far from the door, and beside them stood a petite brunette in a gray dress — Brooke Herbert. The photographs behind her were the Old Louisville apartments of her friends, basked in the same silent light that suffused the paintings of old Dutch master Jan Vermeer with such tangible tranquility. All are taken in the afternoon, and walking past the pictures of unoccupied bathrooms, living rooms and bedrooms, you get the feeling of having stepped into a friend’s apartment, only to realize they hadn’t arrived yet. These photographs are like those perfumed minutes of unhampered voyeurism, when you learn so much about someone by studying the books on their shelves and the contents of their fridge.

Herbert’s belief in the importance of the domestic interior is a fresh and feisty cousin of the concern for aesthetics that propels people into home improvement stores all weekend long. Home, she believes, is a marker of identity. She writes in her artist’s statement that a person’s objects do such an effective job of describing people, that she omitted depicting the owners of her apartments in any tangible way. Still, they are undoubtedly present.

Her concern for domestic space is no bourgeoisie desire for aspirational decorating — it comes with a hip international context. Recently, creepy German wunderkind Gregor Schneider made homes the new galleries. His life’s work has been transforming the interior of the home he inherited from his father in the small town of Rheydt, Germany, into a space for beholding. A work in progress until 2007, he added new rooms, separated others and blocked up windows, adding fake ones in their place, resulting in a labyrinthine structure that he has entitled “Haus ur.” In the 1990s, he began to identically replicate parts of the house in museums and galleries. He moved “Haus ur” to the German pavilion at the 2001 Venice Biennale (the world’s fair of contemporary art) and won a Golden Lion in sculpture for it that year. Schneider’s work has created a sensation in the contemporary art world — a re-evaluation of the banality of domestic space. By teaching people to walk through his house as if it were a work of art, he makes the point that a house is a work of art — and not in a T.J. Maxx/Ethan Allen kind of way. The truth of a house, where the towels are in relation to the shower, how the pots and pans are arranged — all of these are a negotiation between functionality and the needs of the owner and speak to what is really important to them, which is the function of any piece of fine art.

To say that a house or an apartment is as important as a gallery space in terms of legitimate fine art is not a small thing. Just 30 years ago, Judy Chicago and Miriam Shapiro made “Woman House,” a 17-room mansion in California, with the women in the feminist art program at the California Institute for the Arts. Women paired up and transformed each room into a meditation on womanhood in relationship to domesticity (gluing scores of nipples to the kitchen wall to speak of sustenance, hiding mannequins in the linen closet to show entrapment). But by upgrading a house, its whys and hows to the status of gallery and fine art without “modifying” anything moves the conversation about “found art” started by Marcel Duchamp’s famous urinal so far beyond where it began that the gallery setting becomes obsolete in justifying an art object — an idea that is just now having its moment in the sun.

Brooke Herbert’s photographs treat the apartments like they are curiosity museums and challenge us to behold everyday objects as if they are works in a gallery. Her eye for composition makes it easy to accept that these photographs and the spaces they depict are “art,” which is a tribute to her keen eye — the way she balances light and dark; the angles she chooses to shoot from make the argument for beauty plain and palatable. They don’t look like photographs from decorating magazines; they are not intended to sell anyone anything. When taken in together, they suggest a modest pride and narrate the creation of beauty under every circumstance — whether it radiates from the object or the eye of the beholder.

There is also a quiet parable about geographic identity in her photographs. These historic dwellings, with their Victorian fireplaces and stacks of DVDs, quilts and knickknacks, speak of Old Louisville and its exigencies. There is a regional resonance in these spaces, a quality that is so often lacking in new developments and editorials on home style in The Courier-Journal. These are not the suburbs, and this is not California. In highlighting these spaces, Herbert makes the case for authenticity and the chic of a certain kind of Louisville living.