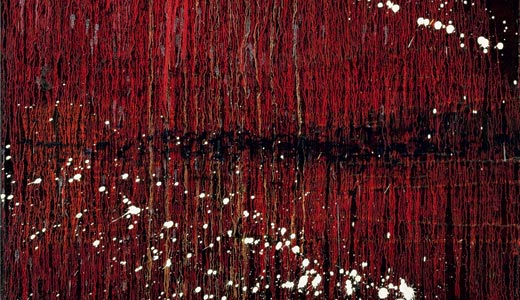 I was recently introduced to the game of “what five pieces of art would you want,” a variation of the “stranded on a desert island” question. I was stumped. That’s a lot of art history, and I’m still thinking about it (I’ve got it narrowed down to about 20).

So imagine if you were Dorothy and Herbert Vogel in the 1960s, asking themselves what art they could collect.

Herbert (now 87) and Dorothy (now 74) had limitations — but not by the amount. They were a middle-class couple living in New York City. Their art budget was meager. He was a postal worker and she a librarian, and they used Herbert’s salary to buy the art. And it had to be small enough to fit into their one-bedroom apartment.

Fast forward to today. The Speed Art Museum is now the proud owner of 50 works from the Vogel Collection. One of the gifts is an exquisite oil-on-canvas painting titled “Red Cascade” by Pat Steir. The flowing maroon lines dotted with white splatters are expressionistic, a style the Vogels also collected.

How the works got to Louisville is the stuff of legend.

When the Vogels started collecting, it became their passion, to the point their apartment was exploding. (Steir met the Vogels in the 1970s and knows them well — she says collecting “became much more than a hobby, it is a profession.”) They donated more than 1,000 works to the National Gallery of Art in Washington, D.C., in 1992. That left them with 2,500 works. Herbert and Dorothy then had discussions with the NGA staff on what to do with the rest.

Thus “Fifty Works for Fifty States” was born. One museum in each state receives 50 pieces, with the Speed Art Museum the depository for Kentucky. A few of the artists included in the gift are Richard Tuttle, Lynda Benglis and Robert Mangold.

“With many beautiful drawings,” says Suzanne Weaver, the Speed’s new curator of contemporary art, “the Vogel gift of 50 works enriches the permanent collection by adding artists and works that deal with seminal ideas in the development of contemporary art since the mid-1960s. The Speed could never afford to purchase the group of Tuttle drawings that are included in the Vogel gift.”

The museum is also thrilled that their Steir painting is on the cover of the exhibition catalog. “I wish I could say that the Speed had something to do with the Pat Steir being chosen for the front cover,” Weaver says. “It is an exceptionally strong painting and represents this amazing artist well.”

There is also a website for “Fifty Works for Fifty States” (www.vogel50x50.org) and an excellent documentary on the Vogels, called “Herb and Dorothy.”

The Speed is actually showing two exhibitions under the Vogel banner. Weaver organized a show from the museum’s permanent collection that complements the Vogel exhibition. Some of the artists featured are Frank Stella, Ellsworth Kelly and Sol LeWitt, a Vogel favorite.

She came to the Speed just at the right time to be part of “Fifty Works.” “I was thrilled to be able to work on the Vogel exhibition,” Weaver says. “It was [an] exciting way to begin learning about the collection and to discover hidden gems.”

Many thought the Vogels would be less active after the gifts, maybe even buy some furniture for the apartment. Not so. While they have slowed down a bit due to age and health, they are now on Round 2 of collecting.

Weaver believes there is a lesson we can all learn here. “The Vogels were not a weird, eccentric couple. At one time they were artists but gave up their art and studios because they saw other artists doing more interesting work. What was important is that they developed long lasting, close friendships with artists, a number of whom helped them educate their eye, understanding of art, and give direction to their collecting interests. They lived and breathed art and learned about it from constantly going to artist studios, galleries and museums.”