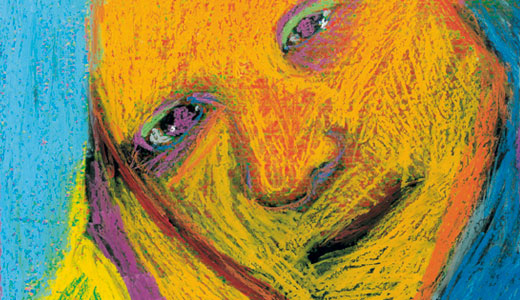 Happy ending first: Jennifer Brunner is a beautiful, purple-haired pixie in a plaid jacket walking between the tall oaks on U of L’s main campus toward the coffee shop where we are meeting. She’s studying to be a nurse now and is engaged; she radiates with all the tangible victory of a young woman who is secure in the knowledge that even if all of the things that prop up the fairytale ending she is now living were to fail her, she would still be OK.

How can she be so sure? Once upon a time, it did.

“I thought I was going to France, but instead I got cancer,” she says, glibly aware of how absurd this sounds. She goes over the stats of her outrageous fortune, Ewing’s sarcoma, which affects one in 330,000 children. “Pretty much on par with the odds for winning the lottery,” she says.

She was diagnosed with a pediatric cancer at age 23. “I had just broken up with my boyfriend, and I had been a total health nut for years — it seemed ridiculous,” she says. “But upon diagnosis, my first instinct wasn’t to cry ‘Rats!’ Now I can’t give people unsolicited health advice anymore.”

With a nod to the irony of her new fate, she traded her graduation gown for a hospital frock, the dream of the twinkling lights of Paris for the anesthetic satellites and heart monitors of Kosair Children’s Hospital. She calls the time she spent in this new landscape — in the hospital and inside her own body — “My journey in Cancer Land,” a phrase she coined while writing her blog “I Won the Crap Lotto.”

So there our princess is, trapped in a high glass tower under a thin blanket, unsure of her future and unable to escape her captor, which until recently was her own benign, haloed body. What is she to do? Anything not to be bored. She repairs to the refuges of her adolescence — writing, drawing, listening to Kurt Cobain. “That ‘Chicken Soup for the Soul’ stuff just made me more depressed,” she says, so instead she kept company with Sylvia Plath and Le Tigre. “I was painting and drawing before, but now I had so much more free time.”

Now, our clever princess loses her golden locks. She becomes a fan of hedonism, any pleasure she can stand she will take, after being deprived of such pedestrian pleasures as bathing and sleeping through the night. Her jokes get sharper, more sarcastic, as her body becomes increasingly less private and more volatile. She radiates like uranium from all the chemicals being piped into her. What subsequently comes out of her, though, is the foie gras of this whole story — “A Bone Fractured Fairytale: My Year Lost in Cancer Land,” an art exhibit up at fb3 through late April.

The exhibit features Jennifer’s exhaustive blogs and satirical fairytale renderings of her experiences battling monsters and demons — her own thorny sense of fatalism, entitlement, false perceptions of God. It’s a deluge of words and images. It’s overwhelming. It’s funny, cutting and uninhibited, glacial in scale. I walked through it in about half an hour.

The most famous Ewing sarcoma survivor, Lucy Grealy, became so in the mid ’90s with her book “Autobiography of a Face,” in which she recounted her struggle with the cancer that disfigured her face as a child. “I saw that, and I thought, Maybe I can read that after I recover, but not now,” she says.

Jennifer’s survival was dependent upon distance from cancer; unable to escape her own body, she created that space with fairytale allegory, humor and objectification. She made it into art. “I wanted to put my voice out there — I wanted to make something that could help other people when it was done helping me.”

She acknowledges that the art about her cancer experience began as a therapeutic exercise, but sees it as an artistic pursuit. “I probably would have been making art about something else,” she explains, “but cancer was the topic that pretty much eclipsed all other subject matters right then, so that’s what the art ended up being about. I am the flying pink unicorn of cancer.”

Miraculously, our princess makes it out of the hospital, where her prince joins her once again. (I have to say that I am completely in awe of any woman who can launch a seduction while bald, hooked up to an IV and vomiting strawberry ice cream. In addition to being one of those rare creatures enviously stripped of ego, embarrassment and self-pity, she is also the ultimate pick-up artist.)

This brings us to this happy ending that flanks this foray into Cancer Land — a happy ending taking place in this city right this instant, a happy beginning of sorts, in which Jennifer is cancer-free, studying to be a nurse and making plans to go to Spain. “It’s not France, but it’s close,” she says as we leave the coffee shop. It pretty much sums up her existential position on the whole experience.