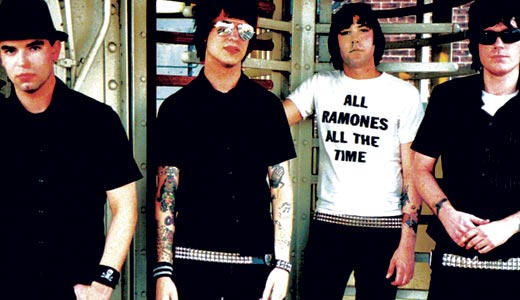 Saint Fest II looks more like a punk rock circus of sins rather than the birthday bash for a 23-year-old.

With a bill that serves no purpose beyond his own amusement, Jason Saint is ready for the second year of his festival to unhook. “I tried to make this year’s lineup something for everyone,” he says.

The twisted carnival features a diverse blend of the local and regional, and a new locale, switching from Bulldog Café in Fairdale to Skull Alley.

As far as music goes, the reunited Chicago group Street Brats play their first show in three years. “I was blown away that they said yes, so I was like ‘OK, let’s do this,’” Saint says. “I’m hoping this is the beginning of something big for those guys.” Could be: The Brats’ new record is due out later this spring.

Bardstown, Ky., hardcore outfit Devastation by Dawn, Bloomington, Ind., ska proprietors Coinslot and local horror-punks The Revenants will be on hand, as will singer/songwriter Josh Napier and Nowhere Fast.

“It’s good to have someone like Jason Saint, who not only supports bands such as mine, but who also has a passion for the Louisville underground,” Nowhere Fast lead singer and guitarist Seth Robinson says. “I believe if he keeps Saint Fest going, it could help unite the scene again.”

This year’s ropes in nonmusical elements: Improv comedy by The Indicators and Microcosm Publishing; a performance by local magician Draven. Cast members from locally produced films “Welcome Back,” a coming-of-age comedy, and “The Legacy,” a straightforward horror flick, will be on hand for DVD signings as well. The pornographic puppets of Gunther Toody’s Happy Fun Show will promote the release of their upcoming DVD. Rumor has it Spiderman might even show up, too.

“Saint does this for all the right reasons,” says Bryan Puckett, the owner of Little Heart Records, a Saint Fest II co-sponsor. “The kid is all heart and cares more about this scene than anyone I’ve ever met.”