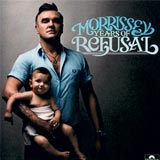 “You’re making a fool of yourself, so get off the stage,” Morrissey sang in 1989, calling out aging rockers on their complacency and irrelevance. But as Moz himself approaches 50, he’s still making some of the most essential music of his career, as demonstrated on Years of Refusal. The album lacks You Are the Quarry’s laser-precision focus, but it never feels unmoored like Ringleader of the Tormentors, either — instead, it combines the vitality of classics like Your Arsenal with the more insular sensibility of fan favorites like Southpaw Grammar and Maladjusted, without recycling from any of them. “I’m Throwing My Arms Around Paris” is a dynamite single that would’ve fit nicely on Vauxhall and I, proving, along with songs like “Black Cloud” and “When Last I Spoke to Carol,” that Morrissey needn’t worry about getting off the stage anytime soon.