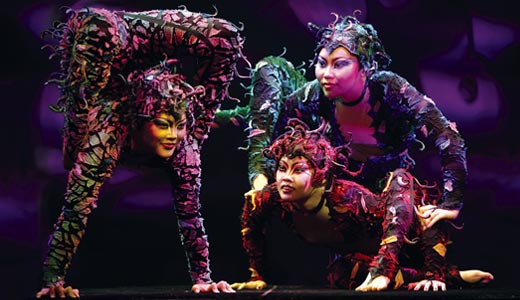 I’ve never felt more unhealthy and out of shape in my life. There I was, belly full of the most sinful Mexican delights (8 pounds of chips, cheese dip, tacos, sour cream and Coronas), settling into my seat at Whitney Hall in the Kentucky Center, ready to be razzled and dazzled by the Broadway Across America show “Cirque Dreams Jungle Fantasy.” I kinda knew what to expect — soaring acrobats, jugglers, people hanging from ropes, amazing costumes most likely depicting a jungle scene. But what I saw was more than two hours of amazing feats of human athleticism.

Four women, called “Contorting Lizards,” effortlessly climbed and balanced on each other, only to roll off into another pose. Position after position, their acrobatics became more difficult, yet it looked so fluid and unhuman. Legs dangled over heads. One woman wrapped herself around the torso of a violinist.

It was during this performance I felt the first pang of guilt bubbling up from my stuffed stomach. These ladies probably don’t eat chips and salsa. They don’t drink beer. I sank back down into my chair, feeling my belly pushing against the tightening waist of my pants.

It only got more uncomfortable from there. Men were pulling themselves up 20 feet in the air by two ropes. They swung and hung and did summersaults in mid-air. Muscles bulged. I sipped my wine. There was a balancing giraffe, a juggling frog and tigers that contorted and scaled each other.

The only cheesiness in the production came when the character Mother Nature (who I dubbed “Jungle Barbie”) strolled onstage and sang lame jingles like she was in a douche commercial. Her role was to entertain and move the story along while the rest of the cast changed costumes and rested, but it came off hokey and PG.

During intermission, I glanced through the program to find out more about this bendable cast. What I found put my guilt at ease. A majority of the “Cirque” performers aren’t from here. They have names like Buyankhishig, Vladimir, Nataliya and Stefka (Jungle Barbie: Amanda, go figure). They didn’t grow up eating McDonald’s and playing Nintendo and stuffing their mouths full of Gummi Bears. Of course they can contort and balance and climb and bend … they’re from places like Moscow and Mongolia and the Ukraine … places whose governments didn’t tell them that ketchup is a vegetable.