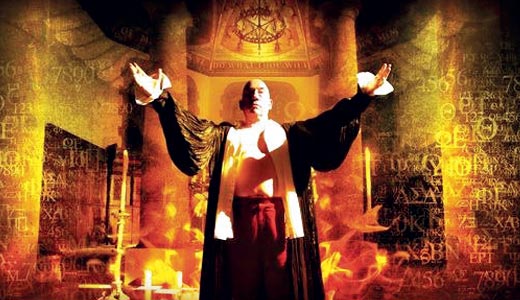 As Ozzy Osbourne reminded us in “Mr. Crowley,” Aleister Crowley was a man who reveled in the corrupt and decadent. By the time of his death in 1947, “The Wickedest Man In The World” had written scores of occult text, his most famous being “The Book of The Law,” whose central theme was “Do what thou wilt shall be the whole of the law.” In this flick from Iron Maiden’s Bruce Dickinson, Crowley’s spirit is resurrected in the body of a shy professor after an experiment in virtual reality, leading to orgies, terrible black magik and an attack on the soul of man.

A popular and effective art house shocker from France about a young and imaginative Jewish boy who on his 15th birthday discovers his family’s unholy ties to the Holocaust.

Chicago in the late 1950s was a town rife with racism and corruption. But that’s where Leonard Chess founded Chess Records with such legends as Muddy Waters, Chuck Berry and Etta James. Frankly, this biodrama, starring Adrien Brody, Beyoncé Knowles, Mos Def and others, is simply not up to the challenge of expressing the sex, violence and burgeoning rock ’n’ roll talent of the times, but the filmmakers really can’t be faulted: This was some of our country’s greatest music and most gifted performers. Check it out, then get the original recordings.

Sally Hawkins stars in this unclassifiable comedy/drama thingy from Britain about a schoolteacher whose chipper outlook on life is so exuberant that it borders on madness. An effervescent, optimistic free spirit, she giggles and laughs her way through whatever life throws at her. Wonderfully odd. Recommended.

LET THE RIGHT ONE IN

Forget “Twilight”; this is the best teen vampire flick of recent times. A fragile, bullied 12-year-old boy in Sweden discovers that his beautiful new neighbor is a vampire. Frightened and confused, he befriends her and learns to fight back with her help. Violent, romantic, sweet and horrible in turns: the very essence of the vampire myth. Highly recommended.

Sean Penn is simply amazing as San Francisco’s first openly gay elected official, Supervisor Harvey Milk. Assassinated in 1978 by fellow Supervisor Dan White (Josh Brolin), Milk served as the touchstone for SF’s burgeoning gay community, proving that they had political might so long as they remained true to themselves. All that aside: Sean Penn’s performance here is uncanny.

Anne Hathaway — who first impressed us on “Malcolm in the Middle” — takes on a truly adult role and nails it! She is the dark sheep of an otherwise perfect family, returning home for the wedding of her sister, “good daughter” Rosemarie DeWitt. Trying to “behave,” she struggles to contain her biting wit and suppress her rejection of the social hypocrisy around her, leading to an explosion of pent-up familial tension for director Jonathan Demme. Recommended.

A pair of losers (Seann William Scott and Paul Rudd) get into trouble with the law and wind up sentenced to mentor kids at a Big Brother program run by the always hilarious Jane Lynch. While it was fun seeing Scott and Rudd suffer the humiliations dished out by kids Christopher Mintz-Plasse and Bobb’e J. Thompson, we thought that Lynch and Elizabeth Banks stole the show. We liked it.

This is what we call an “Oscar Movie”: It was made deliberately to win an award, even if nobody wants to watch it. It is a marketing ploy. Philip Seymour Hoffman, Samantha Morton and a cast of other first-tier actors deliver writer/director Charlie Kaufman’s too-clever script and thank the Academy. If “Being John Malkovich,” “Adaptation” and “Eternal Sunshine of the Spotless Mind” are your definition of perfect movies, then you will love this.

THE BOY IN THE STRIPED PAJAMAS

A manipulative, if well-made flick from Britain about a bored 8-year-old German who wanders off into forbidden woods during WWII and finds a mysterious fence. On the other side he discovers a boy his own age, and they learn to play “together.” Eventually the horror of the times becomes clear to him when he discovers that the boy is Jewish and is being held in a German death camp.

If you liked “Transporters” 1 and 2, well, then you’re certain to like this. Jason Statham returns as the master “deliveryman,” Frank Martin, hired to get a young Ukranian woman — redheaded freckle-vixen Natalya Rudakova — safely home to daddy. Action ensues.

There are surprisingly few Woody Woodpecker collections available, so this is a real treat. Created by Walter Lantz as a foil for Andy Panda in 1940, and originally voiced by the incomparable Mel Blanc, Woody was synonymous with the frantic cartoon style of the late ’40s and early ’50s. A set of 20 shorts, well-chosen and digitally remastered.

CAROLINE IN THE CITY: THE SECOND SEASON