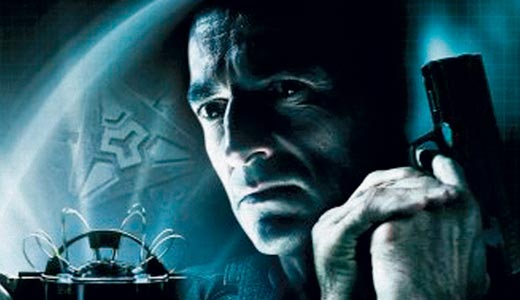 This French sci-fi thriller is first-rate (the French have a history of excellence in this area), from the futuristic look and feel of 2025 Paris, to the seductive technology that ultimately leads to violence and murder. But what we liked best about this cyberpunk hunt for a serial killer was the fight scenes, choreographed by Alain Figlarz of “The Bourne Identity,” and the presence of Mélanie Thierry, the hot babe at the center of “Babylon A.D.” A visual treat with a dark, sexy center.

This film is a wicked little German puzzle. Yella escapes from her violent ex-husband to start a new life across the country. Abandoning her former career, she takes a job at a private equity company where she is befriended by Phillip, a handsome executive who shows her how to plot hostile business takeovers. With her life back in motion, she is about to realize her dreams of success when she hears something odd: voices and other sounds from her past. At first just an echo, they grow and begin to menace her in terrifying ways, and here the movie takes a turn that leads to …? Check it out.

A hilarious full-length version of Mark Hicks’ infamous YouTube hit. When he comes into possession of a magic sword, our hero immediately grows a big-ole ’fro to become (whaak, whaak, whaak!) Afro-Ninja! Super-powered warrior in the battle between Good and Evil … which in this case means saving his homies from corruption and gangsters. Fun.

A brotherhood of angels is sent to Earth to protect us from fallen spirits who seek to corrupt. The Dove Foundation has given this anime series their “Family Approved” seal, meaning you absolutely, positively will not go to hell for watching it — unlike all you Teletubbies fans: You’re doooomed!

Ben Kingsley is a successful college prof who often dabbles in the opposite sex but has no intention of making a commitment. Until, that is, Penelope Cruz enters his classroom and he falls madly, deeply, hopelessly in love. A big-ole hunka chicka-flicka with Peter Sarsgaard, Dennis Hopper and Deborah Harry.

William Shatner directed and stars in this goofy-dark, low-rent tale of E.T.s around Area 51, care of Charles Band and his lunatic staff at Full Moon Entertainment. Is it any good? Of course not! But it is entertaining as hell with Amy Acker, Dick Van Patten and Dan Gauthier.

Wow, just what we needed to survive all this modern financial doom: a time-capsule from 1969. Amid manned moon-landings and mod miniskirts, Petula Clark was hitting the charts with such hits as “I Know a Place,” “Downtown” and “Don’t Sleep in the Subway.” This collection features performances from Paris, London and America, duets with Andy Williams and Roger Miller, and a song-and-dance number from “Oliver.”

Thomas Jane decided to forgo this installment of the franchise, so the producers hired Ray Stevenson to hold the gun. After a bloody shootout in which undercover cops are killed and mobster Dominic West is horribly mutilated, both return in force to put an end to The Punisher’s crusade.

A rare misfire for the usually reliable Will Smith. He accidentally kills seven people, talking on his cell phone when he should have been driving, and swears that he will balance the karmic books by giving his life — his organs and his material possessions — to seven deserving people. Then he falls in love with one of them. Hang up and drive, butthead.

No, not an anime! This is part three of a terrific b&w live-action series from Japan of the early ’60s that needs to be on every ninja-lover’s must-see list. At the end of Part 2, shadow-warrior Raizo Ichikawa was destined to be boiled alive in one of the series’ best cliffhangers. But he escapes to once again seek vengeance on the evil warlord.

A fun and spooky tale starring “The O.C.”’s Mischa Barton — as a structural engineer! — along with Cameron Bright of “X-Men: The Last Stand” and Noam Jenkins from “Saw IV.” Mischa is hired to prep a big creepy building for demolition, a place where 16 bodies were once discovered. But was that the end of the horror? Not on your life! This is one building where the walls quite literally have ears … and eyes … and teeth. Good stuff.

THE NANNY: THE COMPLETE THIRD SEASON