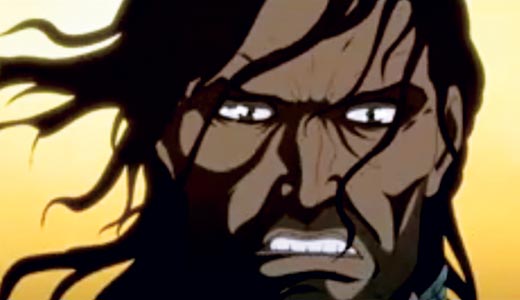 John Travolta and Miley Cyrus give voice to this well-done CG-animated tale from Disney. Travolta is the titular super-dog, star of the biggest show in Hollywood; able to leap tall buildings and round up evil-doers with just a super-bark. She is his owner and co-star. The hook? He doesn’t know it’s all a show! The whole thing’s a lightweight hoot in standard Disney tradition, with one standout: A delusional, thrill-junkie hamster-in-a-ball sidekick named Rhino who completely steals the show with his Clint Eastwood-like toss-offs (“I’ll snap his neck”). Enjoy.

WATCHMEN: TALES OF THE BLACK FREIGHTER/UNDER THE HOOD

A pair “Watchmen” features to accompany the theatrical film release. “Freighter” is an animated tale based on a comic-within-a-comic element largely cut from the film. In it, Gerald Butler voices “The Mariner,” survivor of an attack by the pirates of the Black Freighter, whose fight to return home comes at a terrible cost. “Hood” is a live-action mockumentary from within the “Watchmen” mythology, suggesting backgrounds of many of the feature characters, and an intro into the “Watchmen” alternate reality.

We consider “Andy Richter” one of the top 10 shows of the new millennium. But as with most brash, young, creative ideas, it started off strong but was gradually ground down by The Suits to appease advertisers and censors, leaving it little more than lumpy TV pabulum at times. Oh, but those OTHER times! Andy plays a wannabe writer, toiling away in a huge corporation awaiting his big break, but his fertile mind never stops imagining how life should be. Breathtaking.

CZECH CHILLERS: VALERIE AND HER WEEK OF WONDERS/WITCHES’ HAMMER

Don’t let the Czechoslovakian label scare you off — these are fabulous! “Wonders” feels like a Grimm’s fairytale full of love, sex and religion, with a devilishly improper priest out to vampirize a beautiful woman by trapping her grandmother’s soul. Wickedly fun. Then, “Witches” is like Corman’s “Witchfinder General” meets “Beowulf”: An old woman takes communion in order to steal the wafer to help cure a sick cow (a common folk remedy). But she is discovered and accused of witchcraft, leading to a hysterical Inquisitional scourge of the countryside. Not for the faint of heart.

Mobsters recruit an American malcontent to commit computer bank fraud from Russia. Once there, he is repulsed by the violent, chaotic underworld of Moscow. But before he can escape, he is adopted by a family and falls in love with a dark beauty.

This, Daniel Craig’s second outing as James Bond 007, was disappointing. The previous, “Casino Royale,” was everything a Bond fan could hope for — from the opening chase to the final coda, not a single misstep. This one, however, suffers from a change of directors, with Marc Forster simply unable to stage and capture the essential action pieces intelligently. Beyond poor staging, the story is weak, the editing execrable and the dialogue flat and dull. That being said, it’s still a fun ride — this being 007after all — if you don’t expect too much. A stumble in reinventing the franchise, nonetheless.

This no-budget indie comedy shows how far you can go with little backing but a lot of heart. Four college buds throw a wild bachelor party in Vegas, only to wake up deep in Mexico with no money, transportation, passports or clue as to why someone is shooting at them. And it’s a love story!

We loved this now-forgotten sitcom from the late ’60s, one of the very first works of the legendary James L. Brooks (“Mary Tyler Moore,” “The Simpsons”). Set in a racially diverse inner-city high school with Denise Nicholas as a guidance counselor and the vastly underrated Karen Valentine as a teacher, it launched the careers of many the ’70s best talents including Teri Garr, William Schallert, Bob Balaban, Kenneth Mars, Larry Linville, Bernie Kopell and Rob Reiner.

Katherine Heigl (“Knocked Up”) is terrific in this romantic comedy/drama about a successful career woman, moving up the corporate ladder at an international pharmaceutical giant, who regains her forgotten soul when she meets an activist, fighting the drug industry. The movie is all over the map, but Heigl is as winning as ever; there’s even a good soundtrack!

Shawnee Smith from “Saw” and Marina Sirtis from “Star Trek: TNG” star in this weak straight-to-vid third in the series.

Wildly popular and long-awaited Lebanese/French arthouser. A 16-year-old Lebanese girl must cross a dangerous border checkpoint into Israel to marry a man she has never met. On the other side, her intended husband is not thrilled with the arrangement, either. To complicate matters, the girl tells her parents that she is in love with one of the border guards. Enthralling.

The most anticipated video of the year for teen girls? You betcha! From Stephenie Meyer’s inexplicably popular teen-vampire books, Kristen Stewart plays “Bella,” a dreamy teen, tossed by her parent’s divorce into a new school where she meets mysterious Edward (Robert Pattinson), vampire. All of the usual bloody dangers and pathos are paraded out to exploit their chaste-yet-forbidden love, blah blah blah. Whatever. It makes young girls hot for really older guys, which is good enough for us. (An extremely quick, cheap sequel is being rushed into production as we write.)