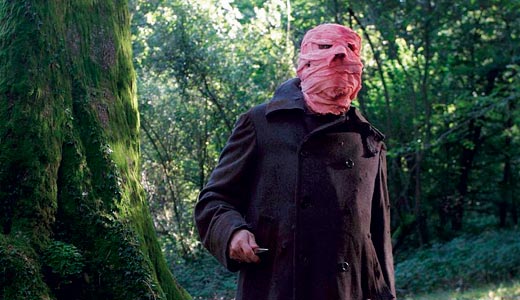 Notice that date: 1968. This is no mad-slasher/dead-teenager movie; this is one of the all-time most disturbing, cerebral and funny horror/dramas ever made, available for the first time on these shores. Karl is an obsessed crematorium worker in Prague who believes that he is liberating the souls of the dead; it is his holy mission. Outside, the Nazis gather on the border, ready to overrun the country; inside, Karl begins to resent his half-Jewish wife and their timid son. Surrealism at its insane best.

A man spies a naked girl running terrified through the forest, but before he can react a stranger comes up from behind, his face covered in pink gauze, and stabs him in the arm with a pair of scissors. Panicked, he runs away, seeking help in a seemingly abandoned mansion — and that’s just the beginning of this mind-bending time-travel mystery from Spain. Our highest recommendation — not to be missed.

AN AMERICAN IN PARIS

First Blu-Ray release of a true classic. Gene Kelly and the lovely Leslie Caron sing and dance to the music of George Gershwin in this multi-Oscar-winning musical. (Part of Warner Bros. Oscar/Blu-Ray parade. Also recommended: “Gigi.”)

From those always-aromatic lads at Troma: This tale of a post-high-schooler who discovers that she was drugged and raped by her sleazy ex-boyfriend. Her revenge? Tie up him and his buds and torture them with … ’80s hair-metal music! Hilarious. Watch for former pornster Ron Jeremy and Troma Prez Lloyd Kaufman.

Hey, we’ll review anything about H.P. Lovecraft! Case in point: This indie attempt at “Shadow Over Innsmouth” with a bit-o-gay-sex thrown in for good measure. Returning to Oregon to execute his late mother’s estate, a man discovers that his father’s wacky cult practices have lead to a terrifying reality.

From the After Dark Horrorfest No. 3, this interesting mix of two bits of Tasmanian history: the extinct Tasmanian tiger and “The Pieman,” hanged for cannibalism in 1824. The filmmakers deftly combine the two as a woman searches the bush for the remains of her sister, lost while researching sightings of the supposedly extinct animal. But what she finds is too terrifying — and subhuman — to believe. Icky.

Fans of this column (support groups available) know that Dave and Bill began their career with a self-published ’zine called The Sinister Urge, named after a movie by Ed D. Wood Jr. This little ditty was Ed’s last screen appearance (he also co-wrote), playing both “Pops,” the gas station attendant, and — with sunglasses and a homemade moustache — a sheriff. Five women, including nudie legend Rene Bond, break out of prison in search of buried spoils, beating up men and tearing each other’s clothes off along the way. The poster screamed, “Their Virgin Skin Violated in a Hell-Hole of Lost Souls!” God bless you, Eddie.

A wonderfully wrong collection of stand-up comics, all more-or-less Italian, starring “Benny” from “Home Improvement.” Lots of mob humor and good-natured family ribbing. You’ll like it. Capeesh?! (And didja hear da one ’bout da ’Talian boy who lost his hands in a accident? He couldn’t TALK no more!)

Owen Wilson and Jennifer Aniston costar behind a big, slobbering mutt in this tale of the life lessons people learn from their pets. Caused some uproar at the theaters when, after the ads promoted this as a “happy, feel-good, people-with-a-puppy” movie, the dog tragically dies at the end.

ROY ROGERS: KING OF THE COWBOYS

A quintet of full-length singing cowboy movies from the Golden Age, plus 10 big episodes of Roy and Dale’s terrific TV show — a two-disc set for under $10! What a steal, pardner! With Gabby Hayes, Andy Devine and The Sons of the Pioneers. Life doesn’t get any better than this.

This eight-time Oscar winner — including Best Picture — surprised a lot of folks. Was it really the Best Picture of 2008? No, that was “Wall-E,” but this is a damn fine/fun gritty mix of “Rocky,” wretched poverty and the glitz and glamour of Bollywood with an Indian Regis Philbin thrown in for good measure. Dev Patel and Freida Pinto star as star-crossed young people, literally fighting for a chance at the big-time on a TV game show, but the heart of the movie is the stars-as-children (Tanay Chheda, Ayush Mahesh Khedekar, Tanvi Ganesh Lonkar and Rubiana Ali) who explain Patel’s seemingly impossible knowledge through flashbacks.

This caused excitement at all the film festivals last year, if only because no one expected it to be this good. Michael Rappaport is an adult loser: quiet, introspective, likes to read comic books all day. Until he takes part in an experimental drug study that gives him … super powers! Or is he just nuts? No one is sure, but he’s out on the streets fighting crime in tights and cape. Definitely worth a look.

Long-awaited video release of a damn good French mystery/thriller starring Kristin Scott-Thomas and Francois Cluzet. She was murdered eight years ago, but today she e-mailed him. Spooky, huh? But this is no teeny “Invisible” retread, this is an intelligent and sophisticated crime tale with truly imaginative turns. Worth checking out.

A thousand years ago a martial-arts master recorded a secret fighting technique for which there was no defense. This document triggered generations of bloodshed as rival clans searched fruitlessly to find it. Then two best friends uncover its whereabouts and learn that it places a terrible curse on whoever uses it. Kung Fu at its best.

IN PLAIN SIGHT: SEASON ONE

THE IT CROWD: THE COMPLETE FIRST SEASON