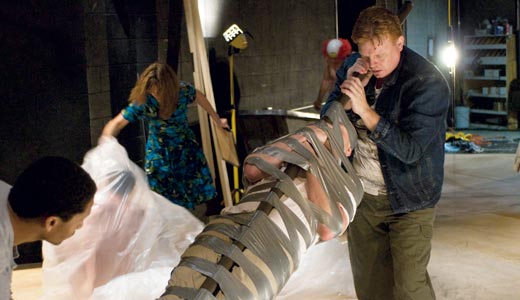 “If I understand something, I have no further use for it,” claims Leon Ingulsrud, one of the ensemble members of “Under Construction,” written by Charles L. Mee and presented as a selection of ATL’s Humana Festival. The statement refers specifically to art and, more universally, to the ever-changing face of the United States. When spoken by a member of the riveting SITI Company, it takes on an even grander meaning.

The company, founded in 1992 by Anne Bogart and Tadashi Suzuki, is committed to the creation of new works as well as international collaboration. Its training is a combination of the Suzuki Method, a demanding physical discipline that focuses on the lower body and footwork, and Viewpoints, a technique of improvisation that stems from choreographer Mary Overlie’s fascinating breakdown of time and space.

True to the organic nature of the group’s conception, SITI’s plays seem to evolve constantly. In “Under Construction,” there are moments that seem freshly improvised. Likely the company is just that cohesive as to render definitively scripted material newly discovered. The innate curiosity and playfulness make SITI compelling.

The thought of this piece in any hands other than the nimble SITI’s gives me pause, because even they can’t always save it from lapsing into triteness. Yet being that the play, inspired by the iconic Norman Rockwell and contemporary artist Jason Rhoades’s sprawling sculptural environments, contrasts ’50s and present-day America, that might just be its goal. After all, reinventing ourselves is our cultural birthright.

In fact, the longer I consider “Under Construction,” the more its subtleties are revealed. Taken individually, some scenes are more successful than others; the music and dance numbers in particular succeed. When viewed as a whole, however, the pieces fit into a strangely satisfying puzzle — just like the jumble of personalities and perspectives that make up America.

The juxtaposition of past and present illuminates the differences not just in our cultural mores, but also in the way we interact socially. Tom Nelis (terrific throughout, as opposed to his 2008 Humana appearance), outfitted in a commencement cap and gown, narrates the procedure for a proper first date, reminiscent of the 1940s-50s government-produced films that offered teen dating etiquette. Two scenes later, the infinitely watchable Ellen Lauren unabashedly approaches various audience members with extremely explicit questions (“Do you prefer vaginal or clitoral stimulation?”).

The company never shies away from poking fun at the idyllic portrait of the ’50s. In a welcome trend reversal, however, its final note is an optimistic one. These days it’s riskier to put faith in the pioneering spirit of America than to lambaste it as destined for ruin.

“If I can understand it, I can put it on the shelf,” Ingulsrud continues. America, constantly and forever shifting, adapting, transforming, has always colored outside the lines. Inspired by that, the SITI Company makes us believe the best is yet to come.