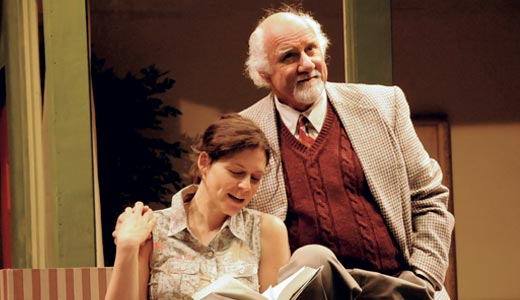 The depressing family houseparty weekend is rapidly becoming a genre of its own — soon Wild and Woolly Video will gather into a discrete section films adapted from and inspired by plays like Zoe Kazan’s “Absalom,” in which acts of filial desperation and juicy family secrets are hoarded, traded and trashed in the pleasantly rustic glow of the comfortable cottage retreat. What keeps us coming back to such familiar bloody ground is the execution, and with her first play, Kazan proves herself a nimble and merciless curator of dysfunctional relationships.

It’s no wonder writers visit this setting again and again. No betrayal cuts as ferociously as family betrayal, and what’s more terrifying than being cooped up with a destructive family for an entire excruciating weekend? The tension of dueling psychological pathologies is too tempting to pass up, and in the Weber clan, gathered at patriarch Saul’s Berkshires house for his birthday party and autobiographical book launch, no member is spared.

That might be this play’s biggest fault. Without even one voice to speak the truth, we are left to pick sides ourselves, and after two hours of festering wounds and knife twists, it’s tempting to want to tie the whole lot of them in a sack and drop it off the boathouse dock. The grown children have been raised, it seems, by wolves, and indeed, father Saul (Peter Michael Goetz) is a misogynist, a liar and a supreme manipulator, his treacherous favor always up for grabs.

Eldest son Adam (Todd Weeks), a bestselling novelist gone to seed in the wake of his only son’s tragic death, starts off unhinged and becomes more desperate as he finds all of his unflattering acts and habits exposed in his father’s autobiography, edited — and to what extent? — by baby brother Teddy (Benjamin Huber), a newly-minted, rising publishing star who might not be as dumb as he seems. Adam’s been keeping his lung cancer diagnosis a secret from all but his sister Sophia (Katie Kreisler), who assumed the martyr matriarch role after their mother’s death, in hopes of committing a passive suicide by refusing treatment. Haunting Saul’s success is the ghost of children past, his foster son Cole (J. Anthony Crane), exiled after claiming credit for Saul’s breakout novel.

When Adam decides to liven up Saul’s party by inviting Cole, he hopes for an epic confrontation to validate his own feelings of betrayal, but Cole uses the opportunity to lift story ideas from Teddy’s wife Julia (Stephanie Janssen) and attempt to win back his father-figure’s approval. Through Julia, we get a sense of what it might be like to marry into the Webers, but of course, she brings her own dark struggles into the fold.

The play’s conclusion is disappointingly realistic. How often do families actually resolve their long-standing conflicts? The endgame, a brutal act of self-preservation, is left undiscovered and unpunished, though Adam and Cole should have known better than to accept anything handed to them by their family at face value.