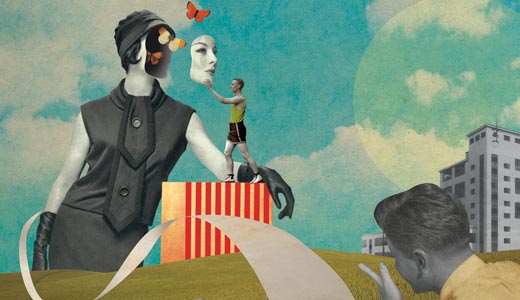 Broadway and the West End, eat your hearts out. Each spring, the theater world turns its discerning eye to little ol’ Louisville for the first look at America’s best new plays. Over the next month, the 33rd Humana Festival of New American Plays at Actors Theatre will showcase an appealing variety of theatrical styles and subjects, from a spoken-word exploration of race and poverty to a 10-minute mother-daughter spy saga.

Welcome to the future of American theater — you saw it here first.

This year, the literary staff at Actors winnowed around 700 festival submissions down to six, plus an apprentice show and a bill of 10-minute plays. The playwrights chosen include both veterans and newcomers, and the lack of a unifying theme is not just a deliberate choice — it’s a major strength of the festival.

Which is not to say the lineup lacks surprising resonances or intriguing connections.

The festival opened Sunday with “Ameriville,” written and performed by the performance team UNIVERSES (Gamal Abdel Chasten, Mildred Ruiz, William Ruiz — aka Ninja — and Steven Sapp). A musical and poetic exploration of politics, race, class and disaster, “Ameriville” considers the history of fear in America in the context of Hurricane Katrina’s impact on New Orleans.

Kentucky is well-represented this year. In addition to heading the selection committee for the festival, Hansel worked with artistic director Marc Masterson to adapt venerable Kentucky poet Wendell Berry’s work for the stage in “Wild Blessings,” which opens March 26.

Other familiar names include the SITI Company, director Anne Bogart and playwright Charles L. Mee, back at ATL on March 17 with “Under Construction,” a collage of American images and music.

This year’s most exuberant offerings come in small packages. The apprentice company shows off their beatboxing and fire-eating skills along with their acting chops in “Brink!,” an anthology of shorts about human rites of passage, written by an ensemble of six playwrights — including Greg Kotis (“Urinetown”) — and directed by Sean Daniels. The traditional crowd-pleasing Ten-Minute Plays (April 4-5) includes a double-crossing spy comedy by Alex Dremann, a drag race by Marco Ramirez and a historical re-enactment musical by Michael Lew.