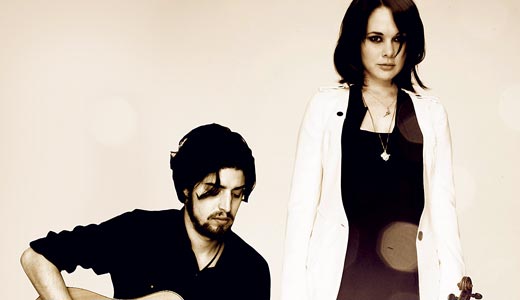 Suzanne Santo had a solid résumé as a model-actress when she was introduced to multi-instrumentalist Ben Jaffe. In quick order, Santo completed a shift in priorities to focus on her violin, banjo and vocal skills.

The acting went on hold (though on the video for “Little Toy Gun,” she keeps up just fine with Ironworks label-head Kiefer Sutherland). Now she’s singing Jaffe’s songs and co-writing with him as a duo named Honeyhoney. Their eclectic, Americana-based sounds will bounce from the Headliners stage Tuesday, opening for labelmate Rocco Deluca.

The duo’s self-titled debut captures songwriting growth — though some tracks show that Jaffe had skills from the start. The tender but bitter “David” is a guided tour through a one-sided relationship that a female friend suffered in. “Sugarcane” is another track about a lover who keeps her individual edge — this time co-written. (As Jaffe told LEO about writing for and with Santo, “We think on the same page. I don’t think you’d sing that if you didn’t have a relationship like that in the past.”)

Despite, or perhaps because of, her ability to channel these complex feelings into song, Santo credits her friend and musical partner for why she can now say, “I feel like I have so much more optimism about love.” But the whole journey will come out during their set at Headliners. Though they now have “an arsenal of songs,” Honeyhoney’s typical set includes “one new song, plus all of the record except for some of the slow ones.”

For this tour with Deluca, a bassist and drummer will aid Santo and Jaffe. “It’s always really fun playing with our rhythm section,” Santo says. “Everyone always brings something innovative to the table. It’ll sound more pop, or it’ll sound more country, and I never get tired of these songs.”

But the singer’s also glad for the company of the full band because it helps sell records: “If we go out as a two-piece, and play the alternate versions that Ben and I are very comfortable playing, and then someone goes out and buys the record, it isn’t the same sound. I can see how that can be confusing.”