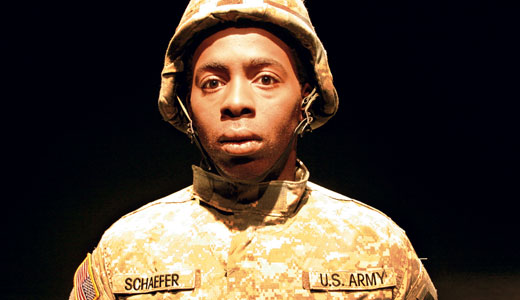 The best way to tell a story is through the people who live it. For “Soldiers Circle,” Russell Vandenbroucke, chair of theatre arts at U of L, spent a recent sabbatical interviewing soldiers fighting in Iraq, and touring countries like Thailand, Cambodia and Vietnam. He developed a drama about modern fighting that is authentic and true to its subject.

“Soldiers themselves are often reluctant to talk about their life-altering experiences,” Vandenbroucke said. “I wanted to use their stories to dramatize the complex dynamics of men and women embroiled in the crucible of war.”

A 15-member cast lays out a story of bonding among soldiers — fulfilling the circle metaphor — through vignettes, anecdotes and songs. Sentiments about the Iraq war, whether political or personal, run the gamut. —Stephen George

With as many times as I’ve been to Vegas, I’m surprised I’ve never made it to see one of those Cirque du Soleil flying acrobat shows that seem to be at all the major hotels out there. I’m also surprised that I’ve never been able to bend, contort and/or maneuver my body anywhere close to what the artistic athletes in these shows can do — in Vegas or any city otherwise, although I tried and came close once in New Orleans.

Broadway Across America is bringing Neil Goldberg’s “Cirque Dreams Jungle Fantasy” to town this week for eight performances. The show, which made its Broadway debut in June, mixes elements of theater, music and astute athleticism and features a cast of 25 aerialists, spine-bending contortionists, acrobats, jugglers and musicians. Think “The Jungle Book” meets yoga class. May the stretching begin. —Sara Havens

“We’re all over the place, which is very dangerous,” Stacey Earle says of her longtime collaboration with Mark Stuart.

“We are writers, and we take pride in the lyrics of the songs. As a result of that, we certainly don’t mind performing very stripped down, because we do want the essence of a lyric to come through,” he says.

Going to San Francisco might be tough for Wild Light. The Boston popsters’ track “California On My Mind,” off their debut Adult Nights, excoriates the foggy peninsula with playful, expletive-laden glee, the kind that’ll keep it off FM radio anytime soon. Wild Light formed in Boston and features Tim Jordan, a founding member of alt faves Arcade Fire. The band’s ascent quickened when they opened for Jordan’s former band at the Orpheum in May 2007, then later joined them on their U.S. tour.

“The whole thing was pretty surreal,” says bassist Seth Pitman, who was born in Louisville and stayed long enough to go home with mom and dad from the hospital. On record, the goal is pop. “That’s what we’ve always tried to go for,” he says, adding that Adult Nights is in large part about “wanting to forget your past a little bit.” —Mat Herron

4. Not everyone gets to perform at The Kennedy Center.

6. Marianne Faithfull and Chet Atkins don’t just like every Nashville cat who walks into a honky-tonk bar. —Mat Herron

Catering to comedy fans with attention deficit disorder, the three kings of condensed humor are returning to Louisville as part of the LEO Presents A Little Off Center Series.

The Reduced Shakespeare Company — a globetrotting, three-man comedy troupe — got its start in 1981, performing a comical, CliffsNotes-style take on Shakespeare’s dramas. “The Complete Works of William Shakespeare (abridged)” became the longest-running comedy in London. Since then, the troupe has efficiently and humorously tackled equally lofty topics — like the Bible and the complete history of America — in a style a la Monty Python and the Marx Brothers.

“We hope to bring together campus and community folks to celebrate the diverse and unique experiences of the LGBT community in Louisville and beyond. In order for the LGBT movement to grow, people across lines of difference must come to the same table and share their stories and experiences with one another,” says LGBT Voices coordinator Jardana Peacock.

The free annual event, this year focused on “Representing Women in the Community,” is a collaboration between The Women’s Center and LGBT Services, with support from the Anne Braden Institute for Social Justice Research. The evening’s activities include spoken word, a digital storytelling project on Don’t Ask Don’t Tell, belly dancing by Taletha and a performance by S.H.E.!, a women’s choreo-poetry group.

“We hope to give a voice to those who often remain voiceless,” Peacock says. “There is a vibrant LGBT community in Louisville that has much to teach and showcase.” —Sara Havens

Brash and fun — that’s J-rock at its best. A little innocent in its concept for mixing pop-metal with some punk and indie — but always freshly energetic in its idiosyncratic pursuit of edginess.

Speaking of which, Satoshi Tsugahara leads his new band Parms in a great take-off on early Edge (and the rest of U2) to begin “Sunlight,” one of the highlights of the Japanese trio’s self-titled debut CD. Parms was formed after the breakup of DrumKan, which had a run of 12 years, toured Japan and the United States with Elliott and recorded at The Funeral Home. Parms is back in town, now at Skull Alley with Frontier(s) and Park Ranger for a mid-week show with a dirt-cheap ticket price. —T.E. Lyons

There’s a reason such things as “Bret Michaels: Rock of Love Bus” exist: The public’s voracious appetite for any and everything concerning the private lives of celebrities grows more quickly than it can gobble each tabloid designed specifically to feed it.

Therefore it’s only appropriate that Pandora’s production of Douglas Carter Beane’s award-winning Broadway comedy, “The Little Dog Laughed,” should follow on the heels of Hollywood’s awards season. The play peers into the life of Mitchell, Hollywood’s latest It-Boy actor, who’s on the cusp of the role of his lifetime. Well, if he can stay in the closet, that is. His calculating agent has her hands full, considering Mitchell has hired the services of a rent boy who just happens to fall in love with him, even though he has a needy girlfriend in tow.

“The Little Dog Laughed” turns a wickedly satirical eye on the Hollywood game and the carefully crafted publicity ploys the industry uses to woo its adoring and fickle public. Pandora, never a company to shy away from biting back, surely will deliver a production with teeth. —Rebecca Haithcoat

Ann Stewart Anderson is celebrating her 74th birthday with a retrospective highlighting her 60+ years of creativity. The exhibit covers a lot of artistic territory: making clothes for paper dolls in the 1940s-50s, postcard art from the early 1970s, her recent mosaics made from recycled broken dishes.

Anderson is primarily known for her feminist painting series, such as “Mythic Women Juxtaposed,” “Mortal Sin/Mitigating Virtue” and “Ladies Room Mirror.” They are not to be missed.

That’s the “looking back” segment of the show. The “moving forward” is her new painting series, “Hidden Faces,” in the lower Garden Gallery.

What the hell is pneuma? The title of Chad Balster’s first solo show had me heading to the dictionary. Turns out it’s the perfect word for a glassblower, as it means, “to blow, breathe, the vital spirit of life.” This breath-of-life concept underscores what a glassblower does for a living.

During the March 6 First Friday Gallery Trolley Hop, Balster will talk about his work from 6-7:30 p.m., followed by a glassblowing demonstration till 9 p.m. Then it’s party time, with music by DJ A. Bell and firespinning till 11 p.m.

You won’t get thirsty when you’re around all that fire. Glassworks is also holding a beer tasting from five local breweries all evening. —Jo Anne Triplett

“I’m watching someone slowly die right in front of me. Anyone dealing with this disease knows exactly what I mean.” Artist Rebecca Freihaut’s husband, Adam, was diagnosed with Multiple Sclerosis before they married in 1999. In 2001, the disease reared its ugly head leaving Rebecca and their two children to cope with the devastating effects of MS as Adam slowly loses his independence and ability to walk. Since that time she’s been using her art as a therapeutic outlet in the hopes that the work will resonate with viewers and leave a lasting impression. Freihaut’s exhibition of recent artwork, titled “Living on the Edge of Reason — Life with MS,” consists of printmaking that combines harsh reality with humor and hope. An artist reception and silent auction will be held from 6:30-8 p.m. on Friday, with proceeds benefiting the Louisville Comprehensive Care Multiple Sclerosis Center. —Britany Baker