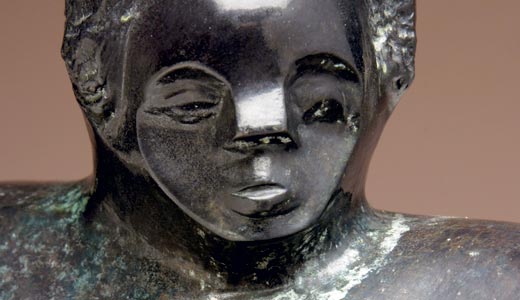 Ready for the indie rock? Brown Shoe, which hails from Sacramento, Calif., is one of those bands that throws all kinds of ingredients into the stew and lets it cook down to just whatever it wants to be. The band’s latest effort, Jackalope, is “moody and atmospheric,” according to one rock pub, infused with elements of British post-punk and American jam bands. The band has been compared with My Morning Jacket, Doves and Red House Painters, to name a few, and has earned MTV placements and plenty of radio airplay across the United States. Sounds like the perfect act for the Rudyard Kipling, doesn’t it? Well, this Thursday, that’s just where Brown Shoe will be; try them on for size. These United States and Chemic perform. —Kevin Gibson

Prodigy would be an understatement.

Twenty-year-old dynamo Ran Jia took her homeland China by storm, playing piano since she was 3 and performing at age 7. But her career went stratospheric when she was invited to perform at Thelonious Monk’s 90th birthday in New York. Not too shabs. She’s earned numerous accolades the world over, and is now studying at the Curtis Institute of Music in Philadelphia. She stops here for a concert as part of Indiana University Southeast’s bold foray, The Discovery Series. She’ll perform pieces from Franz Schubert. —Mat Herron

“The initials of Kentucky are KY … I never thought of that. I wonder if they have jelly there,” Varla Jean Merman said in her most recent blog about her upcoming stop at the Kentucky Center. Part of the LEO Presents A Little Off Center series, the drag performer’s show is titled “The Very Worst of Varla Jean Merman” and promises raunchy, mature humor. Some of her other popular performances include “Anatomically Incorrect,” “I’m Not Paying For This” and “Girl With A Pearl Necklace.” Jeffery Roberson, Merman’s alter ego, has appeared such films as “Girls Will Be Girls” (2003) and has had gigs on the Logo network.

Check out her many videos on YouTube to get an idea of what to expect. An after-party is planned Friday night at Proof. —Sara Havens

Sometimes the bad directs you to the good.

William Duffy didn’t begin stone carving until after he was a painter. He may not have started then if he hadn’t come upon the aftermath of a car accident. One of the cars had hit a marble column. Duffy felt compelled to get a piece of stone, later chiseling it with a hammer and screwdriver. Thus a sculptor was born.

“My admiration of African, Egyptian, Oceanic, Eskimo and other zonal sculptures influence my work immensely,” he says on his website. “I try to blend all of the different styles into one universal style that is appealing to all people.”

The reception for his exhibit “Heads Up!” is Friday from 6-8 p.m. Duffy will give a free talk on Saturday and a demonstration on April 11. —Jo Anne Triplett

Like so many other top R&B acts, the Pointer Sisters started out singing gospel music in church and grew up in a strict-behavior home. “No jewelry, no make-up, no dancing, no movies and certainly no rock music,” Ruth Pointer once told an interviewer. “Our folks would leave the house, and we’d get in the back room and beat pie pans with spoons, making that rhythm and jamming together.”

By the time the Oakland, Calif., girl group made it big on the once-forbidden planet of rock music, the “no” word had given way to more of a high-energy “maybe.” As in maybe I would be interested in a “Slow Hand,” and maybe “He’s So Shy,” and maybe “I’m So Excited.” The Pointer Sisters (now Ruth, June and Ruth’s daughter Issa) were the first black group ever to appear on the Grand Ole Opry. Saturday night they appear with the Louisville Orchestra at the Palace — maybe put a little “Jump” in the joint. —Bill Doolittle

Part of the charming history of U.S. capitalism is rent parties, shindigs that would go down — most famously in Harlem — a few days before the landlord came knocking to collect or evict. This was, of course, after said landlord had gotten greedy and doubled or tripled the rent. You’d open your doors, charge a few bucks, and the neighborhood pretty much pitched in for good will’s sake.

St. John’s Center for Homeless Men is throwing its annual rent party this Saturday. It’ll feature gaming tables, food, prizes (including tickets to Slugger Museum and Churchill Downs), etc. The nonprofit, which only gets a quarter of its budget from government grants each year, provides shelter and assistance for homeless men and those dealing with addiction. —Stephen George

Doug Stanhope isn’t for everyone; that’s kind of his thing. He’s a guy who started off in Vegas doing jack-off jokes in exchange for drinks and now is just as likely to rant about medicinal marijuana and abortion. Hell, his own website notes that he is “vulgar, opinionated, brutally honest and shockingly uninhibited.” He’s also a respected comedian who is coming off a well-received HBO special called “No Refunds,” and who has a number of accolades to his credit, including being named one of the Top Ten Comics to Watch by both Variety and the Hollywood Reporter in 2002. Stanhope will perform at the Pour Haus on Saturday, with local comedian Brad Thacker (from Howard Stern’s Killers of Comedy) opening. You might want to consider leaving your grandparents at home. —Kevin Gibson

Progressive Christianity tends to get obscured, in places like Kentucky, by the more virulent strands of conservative, political doctrine — the evangelicals of the Bush administration, say. So it’s refreshing to hear, even if you aren’t religious, that somebody like Brian McLaren is coming through these parts. A pastor, author and speaker, McLaren brings a progressive worldview that encourages an appreciation of nonviolence and humanitarianism, of science and human compassion, in our country and its leadership — a stark contrast to the super-politicized Bible-thumping we’ve seen from the White House these last eight years. McLaren, no political ideologue, has called for a more equal distribution of wealth in this country and for a re-examination of America’s wartime policies and procedures, including torture. —Stephen George

So far: impressive. Comedy Caravan’s monthly jazz shows prevented a sizeable void in the jazz scene after the closure of the Jazz Factory.

To date, the shows have included those disciples of jazz and a few who stray off the proverbial path: Squeeze-bot, Kalor, Fattlabb, Doghouse Serenaders, Todd Hildreth Trio, Rascals of Ragtime and others have helped make the Caravan a three-dimensional venue. This Monday, it’s Black Cat Jazz Band and Bobby Falk Group. Go and relieve your Monday woes. —Mat Herron

Local jazz musician Sarah Stivers assembled a group of women to perform at the Louisville Sexual Assault Nurse Examiner (SANE) Program’s third annual Silent Auction and Reception on Tuesday. Dubbing the band Fleur de Lis, musicians include Megan Samples, a student in jazz performance at U of L; Natalie Boeyink, a recent graduate of the masters program at the U of L School of Music and host of Java Jazz on WFPK; and Canadian Amy Rempel, a graduate student in jazz studies at IU Southeast.

“I rarely play with women on the bandstand, and I’ve never had an all-female group, though I’ve wanted to for a long time,” Stivers says. “When I was asked to play the SANE event, I thought it would be appropriate to have a women’s quartet be part of a fundraiser that benefits women.”

SANE is a division of the Center for Women and Families. —Sara Havens

One band’s treasure is an audience member’s trash. When Chicago’s Bitter Tears played their first show, an audience member kindly informed them, “Thanks for ruining my fuckin’ night.” Good thing the band, by its own admission, likes degrading itself.

Bitter Tears coalesced as country and western, later adding a slew of battered orchestral — oboe, cracked violin, dented tubas — in its never-ending quest to branch out. Jam Tarts in the Jakehouse, released March 3 on Carrot Top, walks unusually between the doors marked “alt” and “country.” Maybe a den called Spanish, by way of a deaf landlord who owned the apartment building where Jam came to life. Softcheque and Sick City Four open. —Mat Herron

Wendi Smith’s “Flags” series is composed of 80 small flags depicting animals. They are arranged in a maze, all the better to make us relate to the animals as we move past them.

Lately we’ve had a lot to say about the weather in Louisville. “Cloud Conversations” by Michael Koerner gets right to the heart of “weather talk.” He’s artistically making the point that it can be an avoidance topic, small talk instead of meaningful dialogue. He removes the recognizable clouds and replaces them with symbols, making it very hard for us to say, “Do you see a bunny?” —Jo Anne Triplett