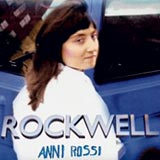 One of my first assignments was to review rapper Khia’s second album, Gangstress. It was the worst album I had ever heard, rife with horrible beats, lame rhymes and out-of-place profanity. Although listening to it was a terrible experience, I decided to keep the disc for future comparison; every time I’m assigned an album I think is awful, I pull out Gangstress to hear what the bottom of the barrel really sounds like.

I will be trashing Gangstress. Anni Rossi’s debut album, Rockwell, is my new measuring stick. The lyrics are uninspired at best (the song “Glaciers” begins with Rossi intoning This is about glaciers several times; this is only the handiest example), the vocals are awful, and the instrumentation is pretentious and irrelevant. The only good thing about this record is that it is substantially shorter than Gangstress (63 minutes), weighing in at a mere 26.