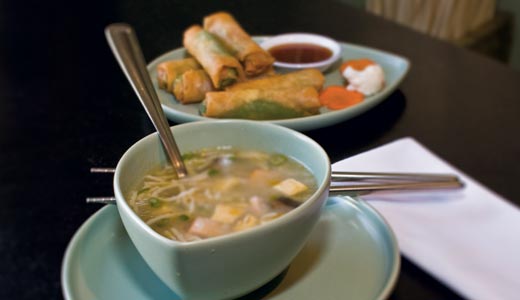 If you’re accustomed to grabbing a cup of coffee and knocking it back without much serious thought, you might find an occasional switch to tea a transformative experience.

Particularly if you choose to savor said cup in the contemplative environment of Zen Tea House in Clifton. Owned by longtime local restaurateur Huong “CoCo” Tran, Zen Tea House completes a neat trio of unusual Asian eateries on Frankfort Avenue, two doors down from her Zen Garden vegetarian restaurant and next door to her nephews’ Basa Modern Vietnamese.

From a rock garden in the small front yard of this Clifton bungalow to the curved, black tea bar that sweeps through the front room, Zen Tea House breathes a quiet, relaxing Asian style. The space is calming and, yes, Zen-like. Small fire grates flicker warmly to remove the chill of winter days. Some “green” features remind that the environment has been paid mind. The front room has several small groupings of upholstered seats. A back room’s low tables have large pillows for reclining.

Dozens of loose teas are available, with a tea menu (and experts on hand) to describe them. A basket contains tiny sample cans so you can view, open, smell — and have any tea brewed on the spot.

We dropped in during a soft opening and found two green teas offered as samples: a mild, herbal-style lotus tea and a spicy “gunpowder” tea, so called because its leaves come rolled in tiny pellets that look a bit like, well, you know.

During our first visit, light snacks — some Vietnamese, some international — were arranged along the bar for sampling: a spicy mushroom pate and crackers, fresh-pickled vegetables, crisp and tangy, and Vietnamese egg rolls with a fiery hot sauce and lettuce leaves for rolling.

Dishes are attractively priced for a recessionary economy. A cup of soup is $3.50, and an order of edamame beans is $2.95. Small-plate dishes (they’re not all that small) are $4.50 (for crisp Vietnamese-style spring rolls) to $8.50 (for several items, including panini sandwiches, café sandwiches or a grilled veggie burger).

On a return visit, we took pillow seats in the back room (caution: They’re best used by the limber.) and enjoyed several plates from the menu and the day’s specials.

A green papaya salad made a cooling, palate-sharpening starter. Finely julienned strips of green papaya, green apple and “meaty” strips of smoked tofu were tossed in a sharp, tangy but not fiery dressing and presented with a pair of metal chopsticks (forks, of course, are routinely presented).

Avocado and tomato crispy rolls ($6.95) were a treat for the eyes and palate. Five small Vietnamese egg rolls, non-traditionally stuffed with strips of soft avocado and fresh tomato and a touch of spice, were fried glassy-crisp, stacked in a neat square and served with a savory piquant dipping sauce that appeared to be the juice of fresh tomatoes with a dash of Vietnamese hot sauce.

The panini of the day ($8.50) was layered with a meaty portobello mushroom and garlicky Boursin cheese, pressed on a panini roll criss-crossed with an attractive (and tasty) golden checkerboard pattern from the press. It came on a long oval plate with a mesclun salad on slices of red and golden beet, and a small portion of crisp, fresh-pickled vegetables.

The chocolate and peanut butter pie ($4.95) was about as rich and creamy as pie can get, yet it’s billed as vegan. Sticky rice pudding ($5.95) was simple and pure, long-cooked rice in a thin, steaming soup topped with a dollop of coconut milk and studded with earthy cubes of cooked taro root.

With a small pot of earthy Chinese Pu Ehr “bird’s nest” tea and a big cup of spicy Indian Darjeeling, a comforting and entirely meatless lunch for two came to $37.71, plus an $8 tip.