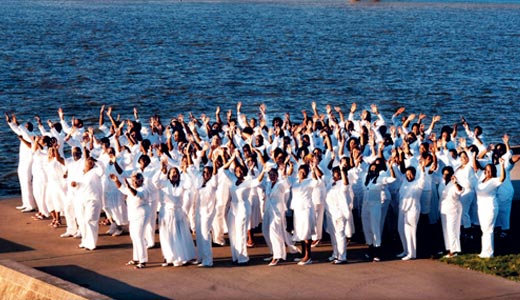 Any higher-up would approve.

For Joe Leavell, a county attorney and the choir’s director since 2000, it’s a vision realized in less metaphysical terms, a flurry of radio and press interviews.

“The response has been tremendous,” says Leavell, who came up with the God is Able compilation in 2006. “I essentially just called in some favors and made it happen.”

Capturing the voices of a choir takes considerable technical skill because it’s a different type of recording, Leavell says, so he roped in Boys in the House Productions (of Lexington), in addition to lead producer Terry Baker, the drummer for preeminent gospel artist Kirk Franklin.

“What sets [the choir] apart is the work ethic,” he says. “I push the envelope all the time. You have to have the right material in order to make it happen.”

The choir sings traditional gospel from the ’70s and ’80s and contemporary gospel, and its listeners have varied religious backgrounds. “Our church is made up of people from different backgrounds,” Leavell says.

St. Stephen is signed to EMTRO Gospel, which is distributed by Warner Bros., the third largest music distributor in the world.