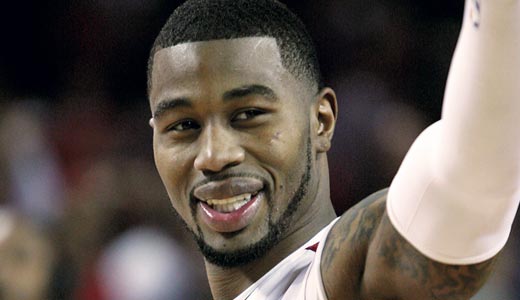 As the buzzer sounds at Freedom Hall, there is not the usual mass exodus to the parking lot. Instead, the red and black sea of fans rises and remains in place, applauding, cheering, not only basking in a victory, but also bidding farewell.

Tonight’s match-up against Seton Hall was the final home game of the season. It also was the last time senior forward Terrence Williams would entertain the home crowd with his basketball skills and trademark antics, like tossing an autographed sneaker into the crowd, jawing with ESPN commentators on the sidelines and mugging for the camera after a breakaway dunk.

“He’s come in really not knowing what road to take, and found out at the end the exact blueprint to be successful,” Coach Rick Pitino says of Williams at the start of a ceremony honoring outgoing players. “He’s been a joy to coach, he’s been a great friend to all of his teammates and he’s been one hell of a basketball player. I’m real proud of what he’s become, on and off the court.”

Taking the microphone, the outspoken 21-year-old laughs, saying he is nervous for the first time in his life. It doesn’t show. In true T-Will form, he exudes a confidence and swagger that few can pull off while remaining likeable and charming. It must be the smile.

A young woman in the front row screeches as though she’s at a rock concert, screaming, “T-Will, I love you,” holding a sign conveying the same.

Pausing mid-sentence, Williams responds with a snicker, “I love you, too.”

The crowd roars with laughter.

This is a moment Williams never expected to reach in his college career, admitting that he intended to leave the University of Louisville early to enter the NBA draft. But now, he is just months away from graduating with a degree in communications, and on the brink of leading the Cardinals — Big East champions and now the No. 1 team in the country — through the NCAA Tournament as the overall No. 1 seed.

Explaining what persuaded him to stay, Williams credits Louisville’s uniquely faithful fan base and, of course, his coach.

“In the beginning, when I was a freshman, we had ups and downs,” Williams says of Pitino. “I had to learn to play for a person who was so tough. He was the greatest person — male figure — to come into my life and get me where I am today. He has made my future bright because he allowed me to play here.”

Growing up in Seattle, Williams was raised by his mother, Sherry Jackson, whom he describes as the strongest and most influential person in his life. Tonight she is among his thousands of adoring fans packed into Freedom Hall.

In his profile on the university athletic department’s website — buried beneath his impressive stats and an enlightening list of favorite things (soft tacos, “Judge Judy,” creative writing, LeBron James) — Williams states the person he would most like to meet is his father.

When Williams was only 6 years old, his father was murdered, a tragedy he has rarely discussed over the years.

Following the senior night ceremony, he talks to reporters inside the cramped locker room, but not before greeting a handful of eager fans. A little boy wearing a Louisville jersey approaches with a basketball for Williams to sign, and of course he obliges. “Thanks T-Will,” the kid says, clutching the ball proudly as he walks away.

When asked about the bond he has with his coach, Williams says Pitino has been like a father figure.

“Everything I speak and do, I learned from him,” says Williams, decked out in a crisp, plaid Burberry shirt, dark blue jeans and shiny black dress shoes. “I would say our relationship is like father, like son, and it’ll be hard to pull us apart.”

Upon arriving at U of L in 2005, Williams had an unchecked ego after four years as a star athlete — playing varsity basketball and football — at Rainier Beach High School. That confidence undoubtedly remains, albeit accompanied with a dose of humility.

During his freshman year, Williams shot the ball every chance he got, a habit Pitino managed to break. Now he’s likely to forgo a shot and pass the ball, a practice that propelled him to become only the third player in Cards history to earn a triple-double (he has two).

But more than just his game has changed. Once harboring a self-described bad attitude and a chip on his shoulder, Williams says his entire outlook on life has changed.

The turning point came during the Notre Dame game his freshman year. Having skipped class the week before, Williams was benched for the game, which the Cards ultimately won in overtime. “I told myself I would never wear a suit and sit on the sideline again from a discipline standpoint.”

Fellow senior and roommate Andre McGee agrees Williams has grown up: “To see him mature the way he has and become a man in front of my eyes was good to see. People said a lot of bad things about him when he first was coming out, about how he wasn’t a people person. I think over the years he’s really opened up to everyone and showed that he’s a great guy.”

In response, Williams says, “I guess I was like his son then,” before poking fun at McGee’s post-game ensemble, which includes a tie, argyle sweater vest and blazer.

Now that his time playing basketball in Louisville is nearing its end, Williams regrets the fact that he might not have fully appreciated every moment.

“It’s like going out with a girl and she breaks up with you,” he explains. “You don’t know what you got until it’s gone.”

Born to run: Why good defense could win a championship for the #1 Cards

The Cards: A retrospective