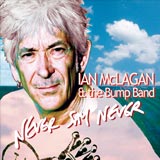 Despite some electric piano flourishes that briefly recall Ian McLagan’s days in the Faces, his latest solo outing, Never Say Never, is doggedly mid-tempo, laying out a relaxed, soulful groove on the opening title track and scarcely deviating from it thereafter. McLagan and his band are obviously comfortable in this pocket, but since there are no standouts, the album suffers from a lack of variety. Never Say Never is not without charm, of course — McLagan’s voice is ragged in spots, but it’s a well-worn, lived-in instrument that rings with authenticity, recalling Ray Davies and, on “I Will Follow,” his old bandmate Rod Stewart. The adjectives that best describe Never Say Never — pleasant, familiar, workmanlike — indicate that while McLagan may not take many chances here, the modest product he does create is enjoyable enough on its own terms.