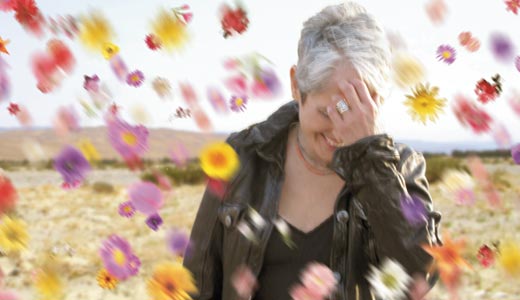 She introduced Bob Dylan to the world, marched with Cesar Chavez, protested Vietnam and shared a stage with Nelson Mandela. Her influence reverberates through decades of folk and rock musicians of every stripe, and although her life is a quieter version of what it used to be, Baez’s latest album, Day After Tomorrow, produced by Steve Earle, is proof of age coming on as gracefully as it possibly can. LEO caught up with the folk legend.

LEO: You just returned from D.C. where you and Pete Seeger played as part of the Inauguration festivities. If you were to describe the state of the union, what would you say?
Joan Baez: I would say that it’s in a very youthful euphoria. For many of us, the trick will be, of course, to make it through that time period and make it useful. It’s easy with Obama to get dreamy-eyed, but he’s capable of extraordinary things. It’s not just trite to say he needs our help.

LEO: What makes an effective leader?
JB: It’s sort of been thrown out of whack, because I’ve never endorsed any. [With Martin Luther King], he really did turn it over to everybody. It was “we,” it was never “I.” [Obama] will have to do some things I don’t agree with, and he already has. But he refers to “us,” he doesn’t say “I” that often. It sort of makes an impact when he does.

LEO: Your first show was at Boston’s Club 47. What do you think about those years, looking back now?
JB: I haven’t spent a whole lot of time thinking about them, but when I do, I’m sort of stunned at the whole thing, the whole process. That was the birthplace of my whole balladeering performances. Everything took place for me in Club 47, begging people to show me the chords, learning.

LEO: Who did you learn from?
JB: Mainly from people who were living there and showing up before Club 47 had shifted from jazz to folk. Club 47 was a jazz club, and the women who ran it had the foresight to see that folk music was on the rise. Eventually it wasn’t a jazz club anymore.

LEO: What do you think is the most misinterpreted aspect of the ’60s?
JB: I think there’s a pretty good recognition of what we were doing. The misconceptions are expecting that music can somehow “do it.” Music accompanies social change, and I would not want to be a part of any social change that didn’t have any music in it. But it has to be backed up by action.

LEO: Do you think musicians nowadays might lose the drive to talk about issues and fall back into a state of complacency after this watershed moment?
JB: I don’t know. The shining faces I’ve seen among younger people — it may be just the opposite.

LEO: When did you first hear “Henry Russell’s Last Words” by Diana Jones [a true account, based on an American mining disaster, that appears on Baez’s new record]?
JB: I heard it maybe a year before we made the album. It was stark and beautiful and to the point. I remember Steve saying that he had so much admiration for the people involved in this event. That’s the hardest thing to do — put words around something that’s already happened. She pulled that off so beautifully.

LEO: After 40 years, do you have to do anything?
JB: Yeah, I mean, I get to be a grandmother now. My mother is 95. I’m learning from her about getting old. In a way, the most important thing for me has been learning how to shut up.