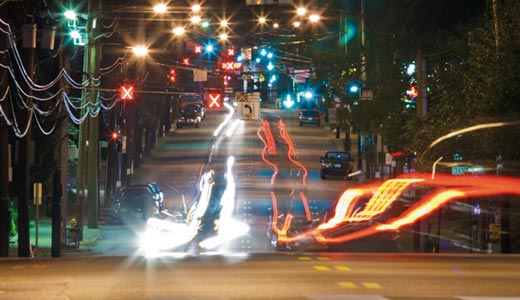 The assignment was simple: We asked six local photographers — some of whom we’ve worked with, others whose work we’ve enjoyed from afar — to give us a photo essay on Louisville. There were no rules or specific content requirements. We gave each photographer three uninterrupted pages and the option to provide whatever layout for the photos he or she wanted. The individual photographers herein dictated almost everything about this package.

We hope you spend some time with these photos. Taken individually, they show the often strange and varied nature of our city; together, they are a magnificent mosaic of a place you can never fully appreciate until you are here. —Britany Baker and Stephen George

I’m a native of Louisville, Kentucky. I’ve lived here all my life and I became interested in the visual arts at an early age. At 14, I started working at local television stations doing video production. This is where I started learning to communicate visually. The crucible was the live television broadcast. Running camera on one of those things is an incredible rush, and it’s an environment that changed the way I see the world using a camera.

I’ve never been to school to learn photography or videography. My college degree is in electrical engineering, but all of my job experience is in media and computers. I spent 15 years doing nothing but computers, with video and stills being a nights-and-weekends pursuit.

In 1998, through a wild set of circumstances, I ended up with a summer job as a “Web Roadie” for the 1998 Ozzfest concert tour featuring heavy metal artist Ozzy Osbourne. Sharon hired me, and I spent the summer on the road doing what is called “blogging” these days. I shot stills, video and wrote a tour diary and uploaded everything using dialup connections right after the shows — a big deal in 1998.

I was still working in computers at the time, and in late 1998 I partnered up with two friends to start an Internet company called “emazing.com.” I was already on the crew list for the 1999 Ozzfest Tour, figuring I’d do that if the Internet gig didn’t pan out. But it did pan out. A month before the tour we sold the company to Sony Music, and my stay in the IT world was extended for another three years.

At the end of that gig I’d had enough with programming computers for a while, so I decided to do something visually creative instead. By way of a birthday gift in late 2002, my girlfriend Beth introduced me to the creative environment at Glassworks in downtown Louisville. It was a turning point. I quickly set up shop at Glassworks and started getting to know the artists there. I photographed their work and their hotshop sessions. I also made friends with gallery owner Marta Hewett, which exposed me to artwork and artists from all over the world.

One of my favorite projects came in 2005, when I was asked to be the primary photographer for Stephen Rolfe Powell’s retrospective book, “Glassmaker.” The two-year project resulted in an award-winning 215-page book designed by Julius Friedman, which was published in 2007 by the University Press of Kentucky. I ended up doing most of the photos in the book, and Julius’s design is a photographer’s wet dream.

In addition to my studio work, my past experience with live television hooked me on the rush of realtime creative effort. To satisfy that need, I do photojournalism for newspapers, magazines and wire services. The unscripted nature of the work, combined with the adrenaline kick of only having one opportunity to get a shot, is a perfect outlet for me. In addition to stills I’ve also returned to shooting video, which is a lot of fun with all of the outlets for distribution online.

I was born in Lexington, spent my childhood in Danville, graduated from Murray State University, and then moved to Louisville. I spent the first few months in town sleeping on a friend’s couch in the Highlands while working at a copy shop downtown. I read LEO or BURT the Cat (see Paul Curry) and spent a lot of time drinking and playing pool at Deddens Highland Fling. I intended my stay here to be a stop over; that was 12 years ago. I now have a house in Schnitzelberg, a studio on Main Street, and my own business (Olive Creative) as a photographer/graphic designer. Louisville is home for me and my wife, Britany.

When you work in media, as a photographer, you get to know your city and its events really well. I think I have been to almost every bar, “ballroom,” convention hall, venue, festival, fundraiser, and shindig in a 20 mile radius, twice. I am not complaining; I get track access on Derby Day. But it does tend to dull the effect that these places and events have on people that do not attend under their own volition. It was nice to go back to those images, and what they represent, and look at their meaning to me as a whole. Although these are not the most beautiful images I have ever taken, they do highlight some of what I think of as defining elements of our little River City.

Page one contains photos about downtown, infrastructure and history. Page two shows some of the people and places that make Louisville interesting and unique for me. Page three focuses on institutions that shape perception, culture, and governance.

John King studied film at Columbia College in Chicago and photography at the University of Louisville. He was the 2001 recipient of the Early Times grant and was the first artist invited to study at the Peggy Guggenheim Museum in Venice, Italy. His work has been shown in many museums and galleries all over the world, and here at home, too, at places such as the Speed Art Museum and the Swanson Reed, Zephyr and Hertz galleries. King also sometimes works in other mediums and hosts the “Louisville is for Lovers” music series and the “Louisville Zombie Attack.” He is also a motorcycle enthusiast.

I suppose working on the types of projects I am always getting into, it has become my nature to seek out other people’s creativity, and being a lifelong walker I have always enjoyed finding messages left by others in our fine cityscape. This project was a great opportunity to crisscross our streets and alleys in search of your messages and artistic expressions; statements of banality, fleeting love, images with layers of meaning. Thoughts and feelings we have every day but rarely dare to broadcast to others. In some cases the most colorful imagery is mostly covered by the seemingly endless gray of city streets. If nothing more, it is proof that we need to communicate with each other, if only to prove that we were here.

Unlike George Webber, Thomas Wolfe’s lead character in the famous literary work “You Can’t Go Home Again,” Leslie Lyons actually made it back to Louisville from the island of Manhattan before the decline of Western civilization this time around. She carried with her many years of photographic explorations brought about by inspiration from music and naked women, mostly. Now she enjoys profiling the good people of this fair city with her public art project, I LIVE IN LOUISVILLE. (www.iliveinlouisville.com)

Raised in Louisville’s South End during the Catholic boom of the “Forced Bussing” era, Marty Pearl took an early interest in the arts, and shortly after an Honorable Discharge from the U.S. Navy in 1990, settled into the Highlands to explore his options for a life of creativity.

Pearl’s earliest goals centered on video production, and after numerous underground hits on Louisville’s public access television, he set aside the camcorder and pursued still photography as a full time profession in 2004.

Drawing on a strong sense of narrative and an understanding of lighting, Pearl quickly adapted his video skills to the art of the 35mm, and in 2005 began freelancing for LEO Weekly. In just under five years, he has had over 500 images published. In addition to his LEO assignments, Pearl also freelances for VYPE Magazine, and is the sole photographer on the annual URHere Magazine.

A photojournalist at heart, Pearl credits the post-WWII era photographers of Life Magazine and the historic Magnum Agency as his main influences. He is a practitioner of the Zen of Photography, which applies photographic principles to his everyday outlook on life: find the best angle, find the best light, seek the overlooked details.

When approached about this project, I contemplated several avenues of execution, and ultimately decided to showcase the nature that is so beautifully enmeshed with our city’s historic urban landscape.

Frederick Law Olmsted’s 19th century vision of a city dweller’s need to find immediate escape into a natural setting, to be inspired by a scenic grassy vista or shaded by towering trees along weaving paths, holds relevance no matter what the year. His park designs — Cherokee, Iroquois, and Shawnee — provide us all with a chance to escape the city without ever leaving its borders.

The tech world we have imprisoned ourselves in, with all its creature comforts and instant gratifications, cannot compare to that which exists naturally without electricity or even man’s assistance. Humbling as it can be, there is no greater peace to be found in Louisville than that which lies in the warm embrace of Mother Nature (despite her occasional wind or ice damage.)

Louisville is, after all, a “City of Parks.”

Post-WWII era photographer Ernst Haas said, “I am not interested in shooting new things — I am interested to see things new.”

With this quote in mind, I regularly venture into the secluded spots of Louisville’s numerous parks, and find angles missed prior and overlooked beauty. Included here are some of my favorites.

I’ve lived in Louisville much of my life — and I love so many things about my adopted city. I also love narrative imagery and thought it would be hilarious if I were able to bring King Louis XVI forward in time to see the city that was named for him. What things would a king like to do on a casual day trip?

All the things I love — of course. The vibrant art scene, excellent local music and unique businesses give my hometown its ultra hip, spicy vibe and make it unlike any other city in the nation. Louisville is a place that has been transformed by the dedication and vision of people who appreciate the potential of a creative and culturally dynamic environment in which to live, play and work.

Welcome Louis XVI. I promise we won’t let anybody chop off your head. This time.

I want to express my absolute gratitude to Geoff, Leia, and Shannon for being willing to play dress up with me in such a public way. Special thanks also to A Costumiery costume shop in New Albany for helping me find the best duds for a King about town. King Louis XVI shops local — and so should you!