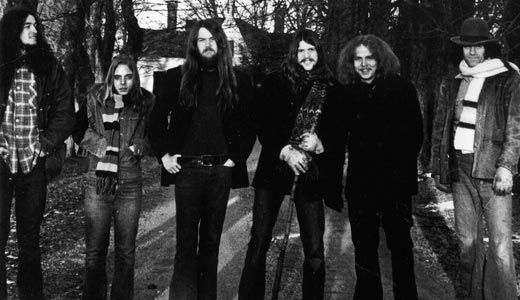 In the early 1970s, the band was the first in River City to do something akin to The Allman Brothers Band’s extended solo jam-out extravaganza of guitar noodling, says singer and guitarist Bill Tullis. But that claim can be misleading, and might even neglect the group’s originality: quality blues meets dirty yet imaginative Southern rock.

On March 13, the group’s album Dirty Sheets was released for the first time ever as part of Gear Fab Records’ “Louisville Music Series.”

Recorded in 1972, well before the advent of digital recording software, Leslie’s Motel “did all the tracks live and most in one take,” Tullis says.

“It was like waking up from a dream … We’ve been around for so long, and it’s nice to go back to our roots,” bassist Ray Barrickman says.

The first time Tullis played with Mike Seibold, the lead guitarist for Leslie’s Motel, was in the group Conception. But after seeing The Allman Joys, who later became The Allman Brothers Band, in Nashville, Tullis’s approach toward music changed forever. He disbanded Conception after the Allmans’ first album and started looking around for players.

After recruiting Barrickman, drummer Paul Hoerni and piano/organ phenom Richard Bush, the band began rehearsing in a garage off Dixie Highway. It was in this end of town that Leslie’s Motel found their name, taking it from a hotel of “ill repute” they passed every day on the way to practice.

The biggest inspiration in the group, according to Tullis, came from Roy Blumenfield, drummer for NYC’s The Blues Project, who, after witnessing the group’s live show, asked if he could join. “I was blown away,” says Tullis, who couldn’t believe they’d scored a legend.

Leslie’s played the club circuit from as far north as Boston and as far west as St. Louis, warming the stage for the likes of Ted Nugent, Charlie Daniels, Freddie King, and even punk pioneers The MC5. Tullis sat in on harp with John Lee Hooker at The Brass Rail in Orchard Park, N.Y., where Leslie’s Motel opened for the blues grand master.

Their demise may sound familiar to any touring musician.

“If you want to make a million dollars in the music business, start out with seven,” Blumenfield says. They simply couldn’t make enough money to get by any longer in the struggling economy of the 1970s.

Mike Seibold recalls the time: “Costs went up. Clubs started paying less. It was hard for a touring band. Then came disco. It was cheaper to buy a sound system than to pay live bands every night.”

The group is pondering a series of reunion shows tentatively set for May or June.

Dirty Sheets is available at ear X-tacy and on Amazon.com.