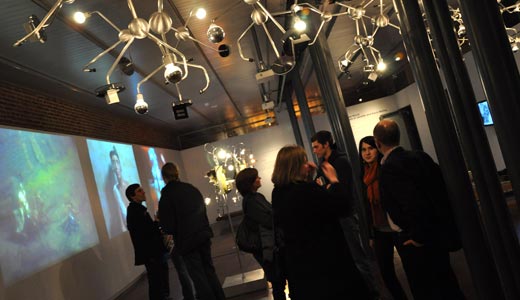 Taken during the opening reception of "The Constant World" on Feb. 27.

It would be tempting to surrender 2009 to the economic depression and ride out the rest of the year holed up on the couch, but Mayor Jerry has christened 2009 the “Year of Visual Arts in Louisville,” which means now is a plum time to take advantage of the novelty of free admission and new slang offered up at many visual art venues around town.

The International Contemporary Art Foundation is hosting the traveling exhibition “The Constant World of Jennifer and Kevin McCoy” at 21c Museum Hotel, open now through June. The installation, which opened in late February, is a mini-retrospective of the work of the husband-and-wife team of new media artists.

It opens with a nebula of cameras, lights and movie reproduction miniatures suspended from the ceiling by a bronchi of imposing metal armatures. It looks like a cloud of menacing, metallic, happy massagers that project onto the wall stills from film noir movies. Upon further inspection, the projections are not stills from actual films, but of the miniatures, no larger than your hand, clustered on the ends of the metal arms of the sculpture. The whole thing — with its low sounds, shifty-eyed camera switching and futuristic sheen — gives off a whiff of the kind of fear and suspicion of technology and censorship brought on historically by the words “Big Brother” and “Metropolis,” now associated with the “The Patriot Act” and “Homeland Security.” It’s not a linear narrative they are presenting, so its useful turn off your pattern switch and instead look for the way the images rhyme in their own snapping algorithm — condensing several decades of formulaic genre filmmaking into a grocery list of words and images controlled by a creepy OK Computer.

Located at eye level behind the title work are three pieces from the “Double Fantasy” series. Imagine a metal box about the size of a cookie sheet at eye level held up by a microphone pole covered in little Homies-sized figurines. Involved in various occupations that range from nuclear science to dinner party hosting, the figurines are surrounded by metal snakelights and cameras that project various stills from the lives of these little people onto the walls. The scenes are depictions of the childhood fantasies of the artists about what their marriage, careers and experiences with God would be like. Now, working as a single artistic unit, their individual “Double Fantasies” combine to create a funny, intriguing and winking whole. Don’t be afraid to laugh. Some of the stuff is comical, like the perceptions a 5-year-old sometimes has. The swirling colored film and flying pulpit on Jennifer’s side of the God “Double Fantasy,” and Kevin sitting on a couch under a Joy Division poster on his, are just some of the small and sincere details in these autobiographical dioramas.

You get the sense that to the McCoys, perception and objectivity are up for grabs, even in an age full of recording technologies that we often assume we can trust implicitly. By presenting us with two things — the object and the object as seen by the camera (or cameras) — we are asked to contemplate which one is true, truer, truest. Stand somewhere else. Look again. There’s always another camera angle, a new way we could perceive whatever we are looking at.