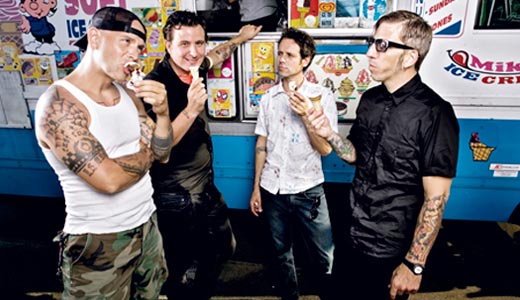 Twenty years is a long time for any band to stick together without interruption, especially one that plays punk rock. New Jersey vets the Bouncing Souls have no intention of splitting up anytime soon.

The band has gracefully risen from handing out samplers at skate parks, playing basements and backyards to touring worldwide and becoming a fixture on the Vans Warped Tour. Their durable brand of pop-punk coalesces sincere lyrics with buoyant melodies, and their sound has never changed to fit the tastes of mainstream radio, earning them an ardent fanbase of “True Believers” (named after one of the band’s most popular sing-alongs).

The Souls spent 10 years on punk powerhouse Epitaph Records. Now free from their contract, they have implemented an unusual release system: one song on the first of the month, every month for all of ’09, via iTunes. They’ve retained a few key elements from their Epitaph days, like producer/ex-Flogging Molly guitarist Ted Hutt, who oversaw 2006’s The Gold Record. This clever scheme is evidence that even after two decades entrenched in the music business, the Souls are more than willing to shake loose from an old mold.

LEO: Where did the idea for this download scheme come from? Was it more about deterring piracy or catching up with current technology?
Greg Attonito: It’s definitely a mix. We’ve done a punk CD every which way you can, and we were like, we don’t want to do the same thing, so what can we do? What we arrived at was that when our contract with Epitaph was up, we wanted to go back to doing it ourselves, and that led us to [having] less of a budget. We decided we should do it as a digital download and record it ourselves. There isn’t all this plastic and this money that we have to invest in this product involved. After being a band for 20 years, we’re learning to make use of what we have as opposed to overspending. Then the idea went, why don’t we do it as sort of a TV episode, as a song at a time as opposed to all at once? We’re able to reflect on the songs as we record them as opposed to rushing through them. Somewhere along the line, it was like, hey, it was our 20th anniversary, too, so all these things started falling into place. One song a month celebrates these entire 20 years.

LEO: After touring hard and recording tons of material for so long, do you foresee a time when the band slows down or stops?
GA: I don’t see why we would ever have to stop. As long as we can play our guitars and sing, and you can do that until you’re just about to keel over, there’s no reason not to [keep going]. Why not?