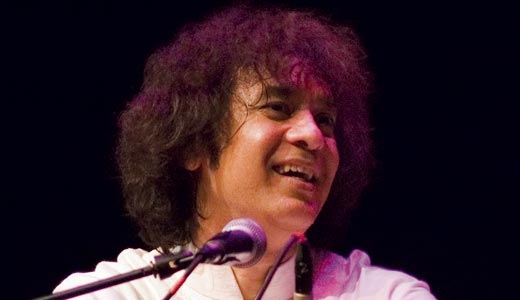 LEO: It seems like this has been already a big year for India, what with the success of “Slumdog Millionaire” and your friend, A.R. Rahman. That had to put you over the moon.
Zakir Hussain: Absolutely. You know that he’s one of our great composers from the world of Bollywood, a great genius, a real genius who has been doing music for, what, about 25 years, and has consistently been one of the finest composers. This is due recognition that he’s gotten, and I’m glad people are looking at India now.

LEO: What do you make of this sort of renewed focus on India, and how has that affected you and your music?
ZH: It’s too early to tell, but I hope it’s not the kind of focus we had in the ’60s, when everybody was wearing tie-dyed shirts, carrying incense and buying sitars and tablas because they saw the Beatles doing it. It was a fad, and in about two years or three years, it was gone. Everyone sort of forgot about India, except for the great Ravi Shankar, but nobody wanted to hear if there was anyone else playing Indian music. I hope that will not happen now, and that people realize India and Indian culture is so vast that Bollywood is one little speck on its canvas. An incredible panorama of art exists there.

LEO: In 2007, you co-wrote the song “Jai Hind” to celebrate India’s 60th year of independence. What was it like for you to try to encapsulate India’s culture and history?
ZH: A circular was sent out to musicians asking them to make suggestions on what should be a new theme song of the 60th year of India. Many, many ideas were given, and it came back that most musicians had listed me as the one to compose it. When I heard that, I thought, “Wow, what an honor it is that they would choose me as the guy who should be doing it and to put that responsibility on me.” All the musicians and artists came together for this. Six or seven famous Bollywood singers are on it, and an equal number of classic and folk singers, about eight or 10, and really fabulous young musicians are on it. It’s nice that the support was so strong that all these great musicians came together. It’s now played regularly every day on television, about once an hour, and people watch it. It’s a song that glorifies 60 years of India. The catchphrase, “Jai Hind,” means “Glory to India.” It was a dream come true.

LEO: You also revived “The Global Drum Project Tour” with Mickey Hart. Is that still going?
ZH: Oh yes, we have a tour that will happen late, late fall. We are working on a new record, and once I’m done with this tour, it’s back into the clutches of Mickey Hart (laughs). You enter the forest in the studio and you emerge four days later. We work there, we eat there, we sleep there, and, if the ideas are coming, we just keep going.