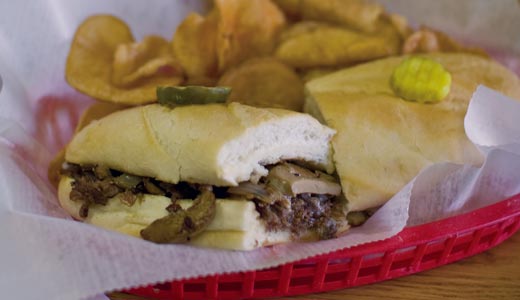 Living in Clifton, I find myself navigating lower Brownsboro Road on a regular basis. While I’ve tried most of the restaurants along that strip — and continue to sorely miss the delicious fare at the now-defunct Taste of Jamaica — a couple options have continued to catch my eye, yet until recently hadn’t convinced me to stop.

The River City Café (aka River City Coffee House), directly across from the Red Pepper near the Zorn Avenue intersection, boasts “best Philly cheesesteak in town” — a claim that has been tough to pass by. Another is Barbara Lee’s Kitchen, which is farther down near the “ghetto Kroger,” a greasy spoon that no one I know has ever visited.

So I decided to stop.

I hit the River City Café on a recent afternoon and found the proprietor watching a crime drama in the tiny café’s lounge area (OK, it’s a couch, a loveseat and a 17-inch TV). I mentioned the sign, and he informed me that his house specialty is a 9-inch sandwich with the classics: beef, cheese, onions, bell peppers and mushrooms. I got mine sans peppers, to go, with the obligatory homemade chips and a Pepsi, and it cost me a reasonable $8.

Upon gathering my to-go order, I asked on what he bases his “best in town” claim. His response: “When you taste it, you’ll know.” All right, then.

Before we get to the sandwich, a few details are probably prudent for the uninitiated. A Philly cheesesteak is a longtime Philadelphia tradition that has a few potential variations, the most debated of which is the type of cheese used: some use Cheez Whiz, while others use provolone cheese or even American.

In addition, a true Philly is messy. Like, really messy, dripping with grease and excess ingredients, all of which sit in a partially split hoagie similar to the way one would serve a bratwurst. The roll should become drenched in the grease from the meat and other ingredients, or so traditionalists will tell you.

Here in Louisville, a couple notable Philly cheesesteaks include Danny Mac’s, which actually uses cream cheese, and Spinnelli’s, which uses the Whiz. And then there’s the chain, Penn Station, but you already knew about that one.

River City Café prefers provolone, and the cheese is melted suitably so that it blends in with the rest of the ingredients. River City also chops the steak finely rather than serving it in slices, Steak-Ums style (another sometimes variation, although using actual Steak-Ums is a no-no). My sandwich featured plenty of onions that were fresh and maintained a bit of crispness, and had a mild but pleasant flavor; the meat was fresh and tender. All in all, the sandwich was satisfying in terms of portion (I was nicely full) and taste; it was quite enjoyable.

The key differentiator here was that it was served on a hoagie roll that was cut completely so that the Philly was stacked like a sub rather than lying on its side with ingredients dumped inside. In addition, there was almost no mess — certainly no need for the traditional “Philadelphia Lean,” which refers to the act of bending forward to eat the cheesesteak rather than bringing it to your mouth.

Truth is, I used only one napkin while devouring this sandwich. I’ll give River City Café a thumbs-up for quality ingredients and value, but the authenticity remains up for debate. Is it the best in town if it doesn’t totally follow tradition? Or should we consider this beast a Louisvilly cheesesteak?

Regardless, the rest of the café’s small menu is interesting as well, meaning that driving by will be even tougher now. The feature is Krispy Krunchy Chicken — a Kansas City-based chain whose product can be found in various truck stops and other eateries across the Midwest — and the Cajun chicken tenders came recommended. Diners can also get a two-piece meal with side and a biscuit for $5 (the fried corn on the cob looks interesting here). There also are varieties of chicken wings (large carry-out orders are a specialty), along with sandwiches, burgers and catfish plates, and most everything on the menu is under $7.

Plus, you don’t have to worry about soiling your clothes.

A day later, I stopped off just down the road at Barbara Lee’s Kitchen for breakfast … only to be informed by a sign on the door that it’s a cash-only establishment. Oops. Off to the ATM I went in search of green.

Upon my return, the place was fairly empty, with just one talkative regular at the counter. I had the small dining room to myself, save the Ms. Pac-Man machine and jukebox.

If you haven’t stumbled across Barbara Lee’s yet, it vaguely resembles a small cottage on the outside, while on the inside it’s like a derelict Waffle House that has been forgotten by time. The grill literally looks leftover from a 1950s diner; I halfway expected a young Ron Howard to walk in with Cindy Williams.

The menu is everything you would expect from such a scene: a mountainous selection of breakfast items with a few burgers and hearty dinners thrown in for those not in the mood for eggs and bacon. One dinner special that caught my eye consisted of twin sirloin steaks with hash browns, a small salad and bread for $9.49. (Two steaks? Really?) Like with River City Café, however, most of the menu items topped out at $7-$8, which isn’t bad during a recession.

And there is indeed value to be had. It was early morning, and I wanted a real, old-fashioned, greasy-spoon breakfast. Let me tell you, that’s exactly what I got when I ordered the Old South Sunday for $6.65. Here’s what landed before me just minutes after I ordered: two eggs over medium, two strips of bacon, two sausage patties, a ridiculous mound of hash browns and — on a separate plate — two biscuits smothered in country-style sausage gravy.

Um, wow. This meal made a Grand Slam look like a Pop-Tart; the biscuits and gravy by themselves would be a hearty meal, so I didn’t come close to finishing. And it was quality stuff, too, taking context into consideration.

Suffice to say this would be the ultimate hangover food, the perfect belly full of grease to finish a late-night Saturday or begin recovery on a Sunday morning. The eggs were cooked perfectly, the biscuits were fluffy, the gravy had plenty of pepper, the meat was tasty — hell, I almost wished I was hungover.

Perhaps the best news is, if a taxi drops me off at Barbara Lee’s early some Sunday morning, I can always walk home.