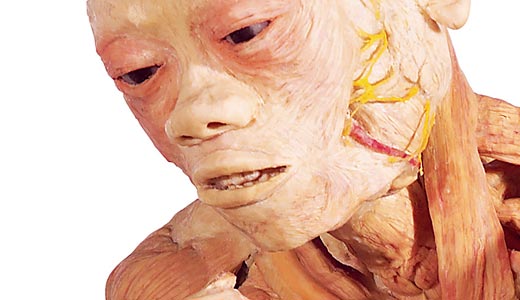 Although we still don’t have an IKEA, Louisville can check “dead body art exhibit” off the list of things that make you a major metropolis. Similar exhibitions have been pit-stopping in major U.S. cities since the late ’90s, the closest to here being “Body Worlds,” which came to Chicago’s Museum of Science and Industry in 2007.

This show, presented by LYNX Exhibits, is a downsized version geared to smaller venues, and it loses some of the flash of others, which is to say it’s more affordable, says LYNX PR rep Terry Valero.

Although the size and quality of the exhibitions may vary, they all have a few things in common, most notably their overall goal: to present the body, inside and out, for audiences to examine, learn from and appreciate. Some may cringe at the idea of looking at dead bodies. I certainly wasn’t excited to take a peak at the Mellwood Arts Center, a building that was once a slaughterhouse. And the specimens in this exhibit, Valero says, are unclaimed bodies from Taiwan. (Note: Most of the larger exhibits, including Body Worlds, use body donors who specifically designate that their bodies be used for educational purposes.)

The exhibition features 11 full human bodies and more than 100 human specimens, including organs and transparent body slices, preserved through a process called plastination. Basically, there is no blood, sweat or tears. Plastination extracts bodily fluids and replaces them with plastics. Some pieces showed the spine, some the veins and arteries as they work through the heart, some compared a healthy liver to one with cirrhosis. The main goal is to “educate the public about the inner workings of the human body, as well as to show the effects of poor health, good health and how various lifestyle choices can affect our health.”

You get to see a healthy knee, cartilage and all, compared with an injured one, not so much cartilage. The 11 full-size bodies are posed in motion and have hokey names, like “The Olympic Champion,” “The Singer,” “The Orator” and “The Soccer Player.”

As you enter the small, dark room, you are greeted by “The Thinker,” who is posed behind a glass case in Rodin’s famous crouch. This reminds us, reads the info card, “that the human body is not only an incredibly sophisticated machine but a magnificent work of art.” The top half of his skull is removed to showcase his brain. The skin is gone to highlight the way the muscles tense in this position. When you walk around the back, his spine is exposed all the way to the tailbone.

The creepiest display was the one showing various slices of a face, all the way up to the outer layer of skin, which featured the eyes, eyebrows, lashes and lips. Many of the displays focused on diseased or unhealthy organs and how they compare with healthy ones. A cancerous spleen was shriveled and dark in color, and smoker’s lungs obviously more shrunken and sparse than a healthy set, full of blossoming bronchial tubes.

Although the exhibition could have used more preparation and cleanup (the Mellwood space this exhibition occupies is dark, dusty and not renovated like the areas where the shops and galleries are), it made me appreciate what’s going on underneath my skin.