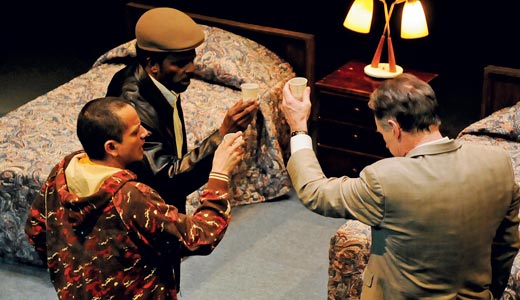 Louisville’s polluted Rubbertown is the unseen fourth character in Naomi Wallace’s “Hard Weather Boating Party,” a villain more dangerous than the chemical plant CEO three men set out to kill for his environmental crimes. You can’t tie the poisonous air up and beat it with an oar, though by the end of the second act it starts to feel as though the protagonists might try.

In this play heavily informed by environmental destruction, economics, race and class, Wallace’s deep political engagement is balanced by her poetic and profane sense of humor, but a heavy-handed fantastical ending threatens the emotional impact of unlikely friendships built in the shadow of death.

And nothing brings men together like a murder plot hatched in a Motel 6. Uptight chemical-plant middle-manager Staddon Vance (Michael Cullen) has hand-picked two of his men to help him kill the company’s CEO. The working stiffs are wary of the boss, who in turn feels alienated from the men he supervises. Their motive — revenge — becomes clear as the men reveal the extent to which exposure to the plant’s toxins has ravaged their bodies and community. Young hothead Lex (Jesse J. Perez) takes nightly swims through the oozing neighborhood lake, polluted by the same lethal sludge that killed his twin sister, and the Gerard Manley Hopkins-quoting veteran badass Coyle (Kevin Jackson) has sent his one true love packing so she couldn’t watch him waste away. Staddon is simply alone in the world, with nobody and nothing to lose.

To pass the time and gain each other’s confidence, the men play a game of Truth or Dare, revealing sexual experimentations and energetic ballet moves, interspersed with a running tally of deadly chemical exposures. They leave the hotel determined to carry out their mission, but the last stand of the three doomed men doesn’t quite go as planned, and second act recriminations and revelations threaten to undo the fragile trust built earlier in the night.

Audience advisories included fog, gunshots and strong language, but for those of us with sensitive stomachs, a fair warning about the loud, wet gobbing and hacking would have been nice. Little bits of magical realism help illustrate how the men’s bodies have been destroyed, from smoking feet to radioactive phlegm, but the surprising deus ex machina ending renders the intensely emotional penultimate scene into little more than an intellectual exercise.

In this unlikely denouement (spoiler alert!), a boat bursts up through the motel floor — poor Jesse’s dream come true — leaving us to wonder if we took a turn for the Sartre somewhere around the beginning of the second act. Are they all dead? Have their lungs already filled with poisoned blood? Or were they gunned down by police at the scene of the crime? It’s as if Wallace felt she needed to tie the ending up with a big symbolic bow, when the men’s final act of desperation and trust could have well stood on its own.