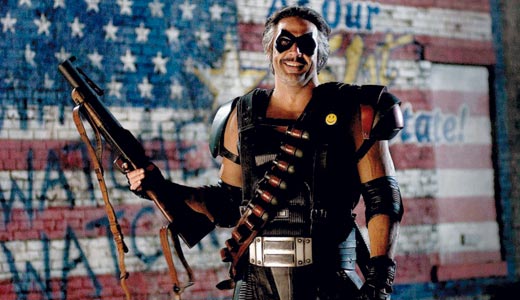 Making “Watchmen” into a film probably had about 10 times the pitfalls most comic book adaptations have. When the original 12-issue series was released in 1986, everything about “Watchmen” was groundbreaking: naturalistic dialogue; violence and its most dire consequences depicted in gruesome detail. The “heroes” had serious shortcomings: a rapist, a violent sociopath, a guy who can’t get it up, and the “villain” of the piece could also be a savior, depending on your ethical viewpoint. “Watchmen” was all about moral gray areas, a subject not usually considered the forte of the funnybook.

Director Zack Snyder had the deck stacked against him making this film, but he managed to come up with at least a full house, if not a straight flush. “Watchmen” is a two-hour, 43-minute movie that doesn’t feel overlong. It manages to be faithful to its source material but has a life of its own. The brilliant credit sequence crams an amazing amount of information into a small space, creating a visual alternate history that deposits the viewer in a 1980s where some people have been fighting crime in elaborate costumes since the ’40s, and a super-being with nearly omnipotent control over matter works for the U.S. of A. To quote the movie: “The superman exists, and he’s American.” He’s also naked and glowing blue. We won Vietnam, Nixon is in a fifth term, and we’re teetering on the edge of nuclear war with the U.S.S.R. No perestroika here.

Our deeply flawed superheroes are embodied admirably well for the most part. Patrick Wilson makes a great Dan Dreiberg/Nite Owl, a man full of doubt and sexual discomfort, a boy scout all grown up and disillusioned. Jeffrey Dean Morgan is right on as the Comedian: the ultimate cynic, a masked avenger turned amoral government mercenary. Jackie Earle Haley makes you doubt that there was anyone else who could have played the terribly damaged and violent Rorschach. As cool and eerie as his shifting inkblot mask is, he really shines in his scenes without it, begging for empathy even as he repulses. Billy Crudup has the difficult role of Dr. Manhattan, America’s naked blue nuclear deterrent. He’s slathered in CGI in all but one sequence, but he still manages to play it with some nuance, almost completely through his voice.

No movie as ambitious as “Watchmen” is perfect. It probably has one too many classic pop songs on the soundtrack, although a couple of the usages are lovably ballsy. Malin Akerman, who plays Silk Spectre II, is passable but a little flat in a role that is important. Matthew Goode as Ozymandias plays his character in such a way that he telegraphs important facts to the audience that really should be a bit more surprising when they are revealed. Otherwise, the film’s defects are inseparable from its strengths: There’s a whole lot going on, it’s about superheroes and it’s pretty unpleasant in parts.