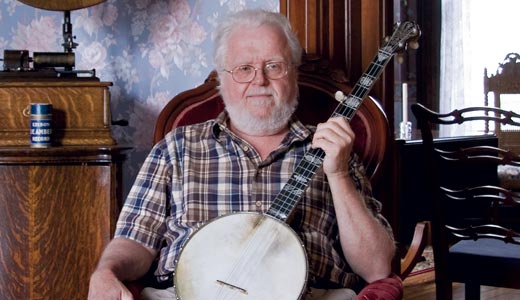 Harry Bickel owns The Bluegrass Hotel, a Victorian mansion that's also his home in the Highlands.photo by ron jasin

A contractual dispute between two artists and the promoter of this weekend’s Bluegrass Hotel Concert led to a flurry of departures from the event’s lineup and its rescheduling — and possible cancellation — Tuesday.

Bill Millet, promoter and owner of San Antonio, Texas-based The Bluegrass Hotel LLC, confirmed that he will be rescheduling the March 20 Galt House concert.

“I think it’s very unfortunate for everyone involved that this didn’t happen,” said Bickel, who owns the Bluegrass Hotel, a Victorian-era home in the Highlands that served as home to a new generation of bluegrass players in the 1970s. “A lot of people really wanted it to happen. Hopefully down the road we’ll be able to do it. All the musicians will remain friends in this.”

Sam Bush, the mandolin player who co-founded New Grass Revival and is credited with inventing the “newgrass” sound, issued a statement March 12 saying he was withdrawing from the lineup because Millet never presented him with a contract but continued to use his likeness in promotional materials for the event.

Through his publicist, Donica Christensen at Sugar Hill Records, Bush said Millet continued to tout Bush’s appearance in public, even after Bush had informed Millet on March 5 that he would not perform.

“For several weeks, now months, Sam had been unsuccessful in his attempts to obtain information relating to the project’s financial and legal structure, and unable to substantiate that all necessary agreements, clearances and approvals had been obtained for completion of the project,” the statement read. “Accordingly, after extensive consultation with legal council, Sam reluctantly decided he could not go forth in such a manner of chaos and liability.”

In an interview with LEO Weekly Monday, Millet said Bush pulled out because he wanted — and would not receive — $10,000 to play and appear in a documentary about the Bluegrass Hotel. He also said guitarist Tony Rice asked for a guarantee of $3,000.

The he-said-he-said boiled over last weekend, with Millet saying he tried to negotiate agreements with Bush and Rice to appear in the film, and that proceeds would benefit the American Cancer Society. “This is not a revenue producing event,” Millet said. “This is a benefit concert.”

Bush and Rice have said they never asked for payment. “I promise you I will work fervently to restore my reputation and earn your trust that Bill Millet has stolen from me,” Bush wrote in a post that appeared on The Bluegrass Blog (thebluegrassblog.com).

Millet told LEO the only delay was his waiting on permission from PBS to air portions of the documentary in a November 2009 broadcast on KET.

Craig Cornwell, KET’s director of programming, said the station did have a letter of agreement with Millet to air the footage in the fall, but it backed out of shooting the March 20 concert because of budget concerns. “We just finished up our annual pledge drive, and the economy is rough these days,” Cornwell said.

WFPK Program Director Stacy Owen said Friday’s Live Lunch, which was originally scheduled to feature the headliners from the Bluegrass Hotel Concert, would take place at noon at ear X-tacy, with Steve Forbert and Rachael Yamagata. As of press time, a 6 p.m. in-store show Thursday by Louisville’s Arnett Hollow was in doubt.

Millet has said that anyone who wants a refund on tickets to the Galt House concert will receive one either from the hotel or through Ticketweb. He said that more than 200 hotel room-concert packages were sold, but Galt House officials could not confirm that. As well, officials from the American Cancer Society could not confirm Tuesday the amount of money raised thus far, although Millet had claimed some $14,000 had already been collected.

In the 1970s, the Bluegrass Hotel served as creative weigh station, crash pad and banjo repair shop for the next generation of bluegrass, or newgrass players, which included Bush and Cowan, as well as players in the Bluegrass Alliance. Bickel lives there with his wife, Ann.