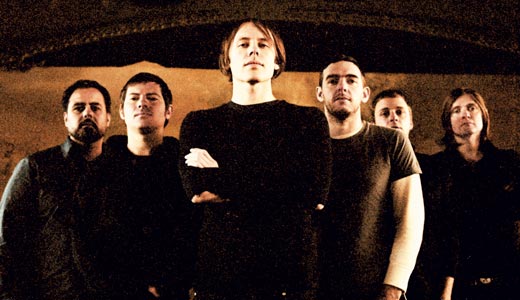 Thursday never literally went away; they just needed a retrofit.

The New Jersey group has moved from aural experimentation back to their gritty roots. Newest title Common Existence is a gale of post-hardcore discontent that combines massive instrumentation with images of life at its bleakest. Even with track titles “As He Climbed the Dark Mountain,” “Subway Funeral” and “You Were the Cancer,” the product is epic but not overbearing.

After trading Island Records for Epitaph, Thursday occupy the lead slot on the current Taste of Chaos Tour while preparing for a singles release. Guitarist Tom Keeley explains what’s changed and what won’t.

LEO: What differentiates Common Existence from A City By the Light Divided?
Tom Keeley: A City By the Light Divided was us reaching out on the furthest limb in our sonic vocabulary. I think we could have nodded to our past a little bit more effectively on that record. It found us experimenting [and] going left of the traditional center to try and find what would be appropriate to bring back to our core sound. We explored the entire room as far as what our band sounds like.

LEO: Is there a single element that’s integral to Thursday’s discography?
TK: Transparency is important. This band has always been about a sharing of open ideas. The truth is, I am surprised we are even a band. Maybe that’s a little disingenuous. I am surprised that we figured out how to become a band. It’s been 10 years, and I suppose that we could have boosted our image to the level of what most people who start bands try to attain — rock stardom, or whatever that is — but the most important thing is the idea that anyone can do it, as long as they care and want to commit themselves fully to a creative endeavor. We’ve done it long enough that it would be fun to open up with it. At the end of the day, we are just a bunch of guys who love music and love sharing music with people, and it just happens that most releases are focused Thursday efforts. We’re normal people. We’re anyone.