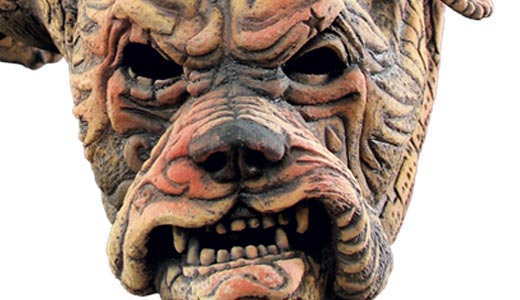 The large bulldog stands on thick, stocky legs, its powerful jaws locked in a snarl. The title, “I Can Assure You My Bite is Worse,” seems a highly credible statement.

This ceramic dog by Brian Somerville won the Best of Show in Sculpture Award at the “Best of Louisville Clay” exhibition at the Kentucky Museum of Art and Craft. It guards the entrance of the gallery as surely as it would if it was alive. You can’t miss it.

New to the Louisville area, Somerville has made his presence known with this sculpture and show. His strong technical skill and choice of themes are highly identifiable.

He favors “animal figures that tell stories about humans and our animalistic behavior,” he says. “Each figure usually references a behavior or a certain situation and not a specific person.” No wonder he named his 2006 MFA thesis exhibition at Florida Atlantic University “Beware of the Dog.”

Somerville’s construction technique is complex. “It was built solid on an armature, cut up, hollowed out and reassembled,” he explains. “After the dog was reassembled, I projected, transferred and drew multiple images on the surface and carved them all into the clay. Nothing was stamped or added onto the work — it was all carved by hand.”

Details are Somerville’s forte. The carvings, which include women, skulls and mushroom clouds, are deeply recessed. The dog even has a fully formed, high-relief tongue.

“The sculpture represents … the good and bad that lie within us all,” he says. “One side depicts nice, pleasant scenes while the other side represents a darker theme. This beast is still deciding which shoulder it should listen to. It has yet to decide, but it should be known that its bite is most certainly worse than its bark.”

Somerville wasn’t the only winner in the exhibition. Additional prizes were awarded to Matthew Gaddie’s “Pitcher Trio” for Best of Show in Function, and special recognition awards went to Wayne Ferguson, Judy Miner, Marie-Elena Ottman and J.D. Shall.

“We wanted to show Louisville what great talent we have here,” Laura Ross, Louisville Clay president, says. “The show is representative of all pottery, from low-fired pieces to wood-fired, wheel through to slab, functional to sculptural. The awards are to bring recognition to our members. Functional and sculptural are two different approaches to clay-making, and we wanted to have equal recognition of each.”

The curator and juror of the show is Gwen Heffner of the Kentucky Artisan Center at Berea, who Ross says “has an excellent eye for pots.”

Louisville Clay presents “Clay Extravaganza” Saturday, March 14. The free event runs from 11 a.m.-4:30 p.m. at KMAC. Many of the members will be there giving wheel and hand-throwing demonstrations, as well as exhibition tours and gallery talks.