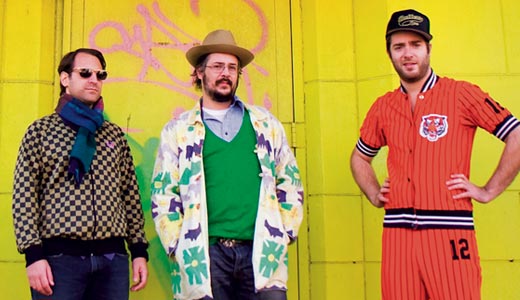 “Last time I was in town visiting my dad, there were like 16 inches of snow and the city was shut down.”

No matter the apocalyptic conditions indigenous to Louisville, another native, Torbitt Schwartz, co-founder of Brooklyn-based jazz/funk/electronic fusion outfit Chin Chin, hopes to cultivate a party atmosphere to make you forget about, well, everything.

“I hope to see a room of people not thinking about the financial crisis or whatever, and instead shaking their asses around and not caring.” Schwartz describes his brother and group frontman Wilder Zoby as someone “who does not take ‘no’ as an answer from the crowd.”

Schwartz’s roots in Louisville run deep — he grew up here, he met TV on the Radio’s Jaleel Bunton here, and with Bunton formed his first band, Navin R. Johnson, in the early ’90s. After realizing that the Louisville scene was more indie-rock driven, Schwartz relocated to New York, searching for a scene more “groove” oriented.

“It felt like at that time there was a notion if you played with chops, it was somehow less valid,” he says.

Sounds familiar. It was in NYC that he found his niche, not to mention the proper musicians, to foster his interests in jazz, hip-hop and dance.

Though Chin Chin is essentially a trio, they perform with a fluid roster of musicians “based on the gig and the bread.” Common collaborators include Tada Hirano, who has played with Blonde Redhead and Cibo Matto, and Japanese prodigy Yusuke Yamamoto (who Schwartz describes as “a motherfucker” in the awe-struck sense), as well as members of Antibalas Afrobeat Orchestra.

“[El-P] was into us as people first, then our record, and then flipped his lid at the show,” Schwartz says. “He has such an expansive ear, so he’s always liked the idea of Def Jux expanding beyond hip-hop. Also, sampling has gotten so expensive that having musicians around who create original sounds is helpful.”

Their latest, The Flashing, The Fancing, offers a smart balance of the electronic and organic, jazz and funk — a sound influenced in equal parts by Steely Dan and Hot Chip, Parliament and Daft Punk. It’s fun and innovative, and also a non-ironic throwback to late ’70s disco flavors. Live or on record, wall-flowering to Chin Chin is not an option.