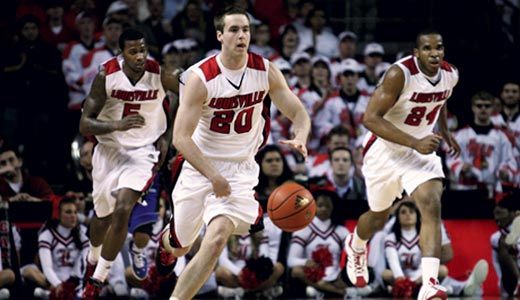 Senior Will Scott (20) leads Earl Clark (5) and Samardo Samuels on a fast break against Seton Hall.martypearl.com

More than anything, what’s propelled the University of Louisville Cardinals to the Big East Conference championship, a Big East tournament victory, a first-ever No. 1 ranking in both polls and the overall No. 1 seeding for the 2009 NCAA college basketball tournament is the team’s uncanny ability to turn it up — at just at the right time.

In somebody else’s kitchen.

Dialed to a temperature so hot that some of the best teams in the country can’t take it.

It’s how Louisville (28-5) went 16-2 in the vaunted Big East. How the Cardinals knocked Pittsburgh off the No. 1 throne, and were able to rebound instantly from harsh spankings by Connecticut and Notre Dame. How they roared back from eight-point halftime deficits to melt Villanova and Syracuse in Madison Square Garden. A couple minutes on the spit and those two teams were done.

It’s been that way since January. Louisville has won 20 of its past 22 games heading into the school’s 35th appearance in the NCAA tournament. Parts of the Cardinals’ game that had previously been spotty — shooting, passing and rebounding — improved markedly late in the season.

But it’s the way the team is able to dial up its defense whenever needed that makes it a contender for the school’s third national championship.

A snapshot of that came at West Virginia in the final game of the regular season. Matched against a supercharged opponent before an electrified crowd, Louisville found itself with the Big East regular season championship squarely on the line. A victory would give Louisville its first trophy. A defeat would lose it. The game was played back and forth, basket by basket. West Virginia took a late 54-52 lead and Louisville coach Rick Pitino called a time out.

Out of the huddle, Louisville worked deliberately to find Earl Clark open for a three-point shot, which he cashed.

And then came the heat.

Almost instantly, Louisville created two steals and five more points — and instead of the momentum going the wrong way, Louisville was suddenly up 58-54. The game changed in seconds.

Obviously Pitino turned up the thermostat on his team’s full-court defensive press. But that was merely a well-timed tactic.

“When you play on the road,” says Pitino, “the most important thing is you play with confidence.”

Which is the Big Picture Pitino framed for his players at halftime.

“We didn’t have a chalkboard, just a little white paper thing on a tripod that we always take with us,” he recalls. “I wrote on one side the defensive keys to the game and on the other side I wrote: ‘Confidence. Confidence. Confidence.’ And at every timeout it was the same way: We’re going to get our run. Here’s what we need to do, let’s go out and do it.”

Pitino, of course, exudes confidence. He has won 596 games, taken three teams to the Final Four, and won a national championship.

“He’s the one guy in college basketball,” says admiring ESPN analyst Jay Bilas, “who without necessarily scoring himself, can influence the course of a game.”

In nearly every game, the senior from Seattle racks up high numbers on the stat sheet. His numbers against Syracuse Saturday night, in the Big East tournament championship game, read: 11 points, 7 rebounds, 3 turnovers, 3 personal fouls, 6 assists and 7 steals. And when the basketball was loose on the floor late in the game, Williams fished down in the struggle, grabbed the ball and flicked a pass ahead to Earl Clark for a dunk at the other end of the floor.

Against West Virginia, he stole a pass and ran right past a player who had the angle on him for a breakaway dunk of his own.

With a guy like T-Will leading a team full of believers, things seem to happen. It’s like the players not only can do what’s needed, they are completely confident they will.

Especially when they crack the full-court whip.

The full-court press, a defensive tactic of guarding opponents over the entire floor, rather than courteously settling for only half, was brought to prominence more than four decades ago — by two teams in particular: UCLA and Wichita State. The Bruins of coach John Wooden spread the game out over the entire 94-foot floor and soared to 10 national championships. UCLA assistant Denny Crum brought the press to Louisville and won two NCAA championships in the 1980s. But Wichita was the first pressing sensation. The Shockers rattled opponents and rang up points like no team before — pretty much averaging 100-plus points a game.

Today, Pitino operates in a rugged league known for its defense. Nobody gets 100. He utilizes the press not so much to soup up the scoring as to stop other teams cold. And his players don’t let up just because the opponent has managed to get the ball across the half-court line. On the contrary, the Cards generally crank up the pressure to thwart three-point shooters.

Again Bilas is struck by the uniqueness of that. “Not many teams have guards like McGee and Knowles who specialize in defense,” he says.

McGee starts on you and it’s a nightmare. You wake up and there’s Preston Knowles. Then Louisville comes at you with its other set of guards — and soon a team’s best game is gone.

It’s especially effective in road games, when the crowd generally focuses its hostility on opponents when they have the ball, not when they don’t.

Louisville was 15-1 on the road in the Big East, and its poise was evident in that final game at West Virginia.

Beyond the play-making forwards, Williams and Clark, and play-stopping guards, Louisville has more that is unique. It has two star freshmen centers, Samardo Samuels and Terrence Jennings. And even a third center, George Goode, who blocks shots and rebounds. Now that is truly a luxury.

Simply put, Louisville is loaded — with plenty of momentum heading into the tournament.

So can Louisville win it all?

“I just don’t think that way,” he says. “The only time I ever thought about a championship was in ‘96 [when he was coaching at Kentucky]. I felt, to myself, I never publicly said it, that we had a dominant basketball team. I look out there now, and I don’t see a dominating team like ours was. I think there are a lot of terrific basketball teams. At the beginning of the year I thought North Carolina was like that — and they still may be before it’s all said and done.”

Pitino is wary of a match-up problem that revealed itself in a February loss to Connecticut — and 7-foot-3 center Hasheem Thabeet.

“If you look at what we’ve really had trouble with, we had trouble with Thabeet,” says Pitino. “You play against Connecticut and they just leave the big guy in the lane. The rest get out there and pressure the hell out of you and say, ‘Come on down the lane. Come on. Here I am.’”

But the obvious solution to the Connecticut problem is distance. Connecticut is the No. 1 seed in the West Region, Louisville No. 1 in the Midwest. The teams could not meet until the Final Four.

And maybe not even then.

In 1982, Virginia and 7-foot-4 Ralph Sampson clobbered Louisville during the regular season in Freedom Hall. But Sampson and Virginia were eliminated from the tournament in some region far, far away, and the Cards advanced to the Final Four.

(Of course, 7-foot Patrick Ewing and Georgetown beat Louisville in the semi-finals in New Orleans that same year.)

The Cards’ other big problem is shooting. Louisville had too many bad-shooting games early in the season to believe those problems couldn’t come back. Although Louisville has hit nice percentages of threes lately, they’re not deadeyes.

But the Cards can play defense. And then turn it up.

And now the forecast, but first a lonely note of protest:

Seedings are undemocratic, affording teams that don’t need them soft paths to the Final Four. And packing the tourney field with “power conference” also-rans is un-American. Why should St. Mary’s stay home so Wisconsin can go one and done? The NCAA takes bows for including a smidgen of small schools from small conferences, then spits on a No. 16 seed and slides it under the heavy boot of a No. 1. Try not to stain the floor while we crush you.

Didn’t “rich should get richer” lose the last election? The tourney should be a blind draw of the most-achieving teams, perhaps conducted regionally.

Last year, all four No. 1 seeds advanced to the Final Four, and that is, lamentably, the trend. Not much chance for Cinderellas and last-second shots from Valparaiso. Butler and Xavier will try. But expect the No. 1s and 2s to cruise.

East Region — It’s hard to root for PITTSBURGH (28-4), with its blunt-instrument style. More like football, where if your line is bigger than their line, you just stick it down their throats. It’s not basketball. But Pitt landed atop the easiest regional. Maybe XAVIER (25-7) can sneak under, or DUKE (28-6) shoot over.

South Region — No. 1 South seed NORTH CAROLINA (28-4) has so much tradition, and talent, but seems somehow beatable. The BUTLER Bulldogs (26-5) might nip at the Tar Heels, but WESTERN KENTUCKY (24-8) is in tough. No. 2 seed OKLAHOMA (27-5) is led by sophomore Blake Griffin, who is weeks away from becoming a multi-millionaire No. 1 draft choice in the NBA. Doesn’t sound like team chemistry. The forgotten upsetter is GONZAGA (26-5). We’ll take the Zags.

West Region — No. 2 seed MEMPHIS (31-3) is led by freshman Tyreke Evans, who was recruited by Louisville until fingered as the driver in a drive-by shooting. But don’t worry, CONNECTICUT (27-4) will beat Memphis. Elsewhere in the bracket, WASHINGTON (25-8) never goes anywhere, but might this time. PURDUE (25-9) and NORTHERN IOWA (23-10) play each other. MISSOURI (28-6) advances.

Midwest Region — LOUISVILLE (28-5) won’t lose to plucky MOREHEAD STATE (19-15), but there’s danger in SIENA (26-7) or OHIO STATE (22-10). And WAKE FOREST (24-6) or UTAH (24-9) after that. Not saying those teams are better than Louisville, but worrisome. MICHIGAN STATE (26-6) might bust some brackets. Defending champ KANSAS (25-7) is afflicted with Point Guard Syndrome. The Jayhawks’ Sherron Collins piddled away the final minutes of a loss to Baylor: Dribble, dribble, I must have the ball, dribble — brick. Point guards can ruin basketball.

Final Four — Gonzaga, Duke, Connecticut, Louisville. The team to beat is definitely Connecticut. Louisville could do it.

One: Terrence Williams has defined an era of Louisville basketball

The Cards: A retrospective