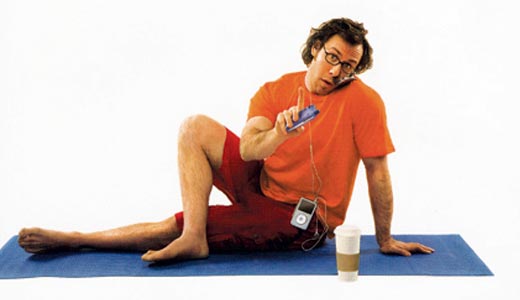 Is it Just Me or Is Everything Shit?: Insanely Annoying Modern Things
(By Steve Lowe and Alan McArthur with Brendan Hay. Grand Central Publishing; 272 pgs., $22.99.)

I have a cell phone that texts and takes photographs. I’ve used both features once. My VCR works fine, thank you; there’s no need for me to buy a DVR. I don’t like books on tape or a Kindle wireless reader, because, shocking as it is, I actually prefer a book’s printed page.

I’m not a total Luddite. I love my microwave so much I barely turn on my oven. I even own DVDs and CDs, although I haven’t trashed my videos, cassettes and LPs yet.

It’s exasperating that there is so much pressure to buy into the latest gizmo. I’m happy and content to have advanced myself into the 1990s and look forward to being in the 21st century sometime soon.

Apparently I’m not alone. “Is it Just Me or Is Everything Shit?” illustrates how the authors, surviving only through their biting humor, are fed up with contemporary society. Gadgets are attacked, as is banality in all forms: “… phony ideas, terrible people, useless products and annoying doublespeak that increasingly dominate our lives.”

While some entries are a little too snarky, others are spot on, like the irritatingly vapid advertisement “Having one of those days?”; pole-dancing lessons; and TV bullies (Simon Cowell, Tyra Banks, “Super-Nanny” Jo Frost). As you can imagine, celebrities take their share of hits.

And, yes, it does cover audio books (“books on CD except for blind people”). I feel vindicated — it isn’t just me. —Jo Anne Triplett

This text was an exercise — specifically, the author’s thesis for a graduate degree. So it shouldn’t be a surprise that execution of the tricky structure seems to take priority over empathetic or memorable characters.

“We all know power and desire couple effortlessly,” says one of the six unnamed narrators. But while we can all acknowledge a broad understanding of the insouciant workings of the world, this doesn’t dim the brilliance when Kundera or Borges revisit such a classic theme. Dovey is just starting to aim for a spot in their company, and a competent execution of her plot seems to be all a reader will receive here … until some gripping and twisty end-scenes.

Unnamed country experiences a coup. Rebels place armed guards all around and distribute propaganda showing abominations by the former president. The president’s chef, barber and portraitist sit and stew in a seized luxury residence. While these three wonder whether they’ll be considered a dictator’s cronies and suffer punishments, the women in their lives gradually command a greater portion of their thoughts. Midway through the novel, the women become the narrators.

Dovey’s melding of the political and the sensual shoves a lot of sexual brinkmanship onto a few pages. Eventually, the plot threatens to creak. It’s partially redeemed by how she treats other pleasures — ones that we might say are simpler, such as being groomed or tasting freshly prepared foods. But important thematic points — say, men and women cultivating refined tastes as a distraction from their own vicious covetousness — become dryly didactic because of the schematic approach.