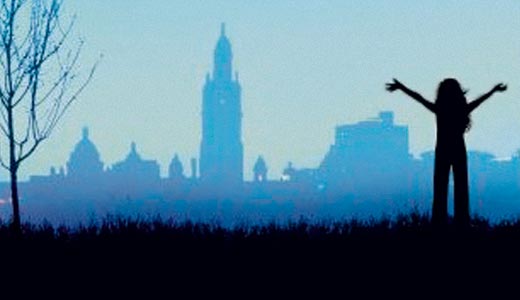 Imagine a cocktail of a book that is one-quarter of each of the following writers, shaken and stirred into a new, heady froth: Roddy Doyle, Hanif Kureishi, Irvine Welsh and Louise Rennison.

Who the heck are they, you ask? See the adjacent Forgotten Classics for Doyle. And know that all of the above are residents of the United Kingdom who write highly colloquial novels that paint portraits of markedly different pockets of society in the once-mighty, now-defunct colonial power. Kureishi’s outstanding contribution is “The Buddha of Suburbia”; Welsh’s is “Trainspotting”; and Rennison’s, author of the wildly popular YA series revolving around the life of one Georgia Nicolson, is “Angus, Thongs, and Full-Frontal Snogging.”

“Being Emily” is not about the existential angst of a girl named Emily, though it does involve, in the manner of romantic-minded young dreamers the world over, a wish to be Emily Bronte.

Fiona O’Connell is no fevered heroine roaming the moors. She is a working-class, Catholic Glaswegian lass who oversees the care of her large family after her mother dies in childbirth. Though the death of the mother is a much-too-handy plot device, particularly in Young Adult literature, it’s rather easy to forgive here, as the other relationships (and their complications) are so carefully drawn, even more because the loss of the mother is not just a convenient plot contrivance but is crucial to Fiona’s own psychological development.

There’s Fiona’s depressed alcoholic father, her urbane older gay brother, her twin sisters (Mona and Rona), her Sikh boyfriend Jaswinder, Jaswinder’s even sexier brother Amric, and the pretentious teachers and students on the faculty of the art school where Fiona finally ends up.

Any summary of the book’s events will only serve to make the story sound like a teen soap opera: Mama dies, daddy starts drinking, older brother comes out of the closet, lovable narrator runs off with Indian boyfriend’s brother, ends up impregnated by him but has miscarriage and then is abandoned by him, narrator’s little sister ends up pregnant but does not miscarry, narrator reunites with old boyfriend. See what I mean? Suds.

Yet “Being Emily” extends far beyond the purview of soap opera. Fiona must ultimately overcome reams of superstition, religious and otherwise, to arrive at her rational, forgiving view of the world and of herself. She labors long and hard to understand that she is fundamentally not in any way like Cathy Earnshaw of “Wuthering Heights,” nor does she really want to be.

The relationships are one thing — believable and real. But what sings in Donovan’s work is the Glasgow dialect, first brought to life in her prize-winning novel “Buddha Da,” built out of Donovan’s standup comic routines in Scotland. (In Glaswegian, a hand is a “haund,” an infant is a “wean” [a contraction of “wee one”], home is “hame.”) While “Buddha Da” was hugely entertaining, the kind of book-length poem you want to hear read aloud by a Scotswoman, it did not have the dark underlying tenderness of “Emily”: “Mammy’d made it hame, and since she’d gone it wasnae hame any mair.”

Often you feel practically forced to say the sentences aloud. I defy you to read the following passage silently:

Patrick, ma da and me sat in a row on the couch. There was a decoratin programme on the TV and a guy in an orange tee shirt was witterin on aboot paint effects. Patrick watches this every week and Da just sits in fronty anythin that’s on the box. Ah looked up from ma book.

Consumption no be done aboot it?

It’s the Brontes. There was six of them at the start and the two big sisters died of consumption. Whit is it?

Some kind of pneumonia or that. They’d all kinds of diseases in they days we don’t really get noo. Your granny had scarlet fever when she was wee. My God, would you look at the colour he’s puttin on that wall.

You’d need to be pistachio-ed tae pain yer livin room like that.

If you want to hear Donovan’s sentences flawlessly interpreted for you, the audio version of the novel, peformed by Katy Anderson, is a gift to the universe.