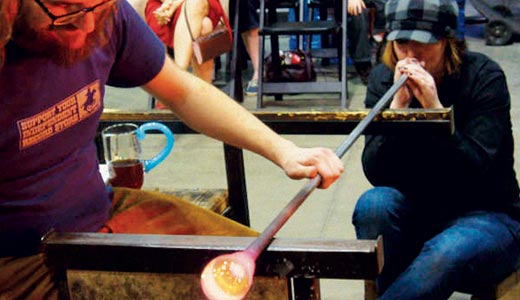 Hindsight is 20/20, they say. Next time I’ll have to remember that when I find myself crouched on my knees, blowing into a long, hard shaft of the metal sort, my air filling and expanding liquid glass that’s roughly 2,200 degrees.

It doesn’t take much to twist my arm. All I knew was Glassworks was holding its first ever Blow Your Own (BYO) Beer Mug event, and every bit of it sounded like my kind of gig. I’d get to make my own beer mug, pick the colors and, most importantly, drink $3 pints all night from five local breweries.

When I arrived, I headed straight for the beer (natch). With a BBC Bourbon Barrel Stout in hand, I was ready to lend my air for the sake of art. I was paired up with McKinley Moore, a humble, diligent glassworker who had partaken in the consumption of an adult beverage as well. “We usually don’t drink when we’re doing this,” he said as he opened the massive oven and dabbed out what looked like lava on the end of the thin metal tube. As he rolled it around to cool, he asked me to pick a color and take a seat near his station. “Rainbow!” I shouted like an exuberant 3-year-old at an ice cream shop — or a 32-year-old gay man at a pride fest. Rainbow it was.

After a few minutes of rolling it around and stretching it out, it was time for me to commence my blow. “Assume the position,” Moore told me as if I were a pro at this kind of activity. I kneeled down and gently placed my hands around the shaft. “Blow lightly, not hard,” is what he said. “And just follow my instruction.” After a moment of blushing, I composed myself and prepared to give it some air. The molten lava at the end soon began to expand, and as Moore continued to roll and shape it, an actual mug was beginning to form.

After about five minutes of slow and steady blowing, he gave me my last instruction: “Stop!” I sat back, proudly, and watched as Moore made a glory hole (his words, not mine) in my glass bubble. He added the handle, also in rainbow, and the base of the mug. My job was done here. Both parties satisfied and sipping beer.

If you’d like to blow your own mug and discover your inner glory hole, Glassworks is offering the BYO Beer Mug event every Saturday in March (cost is $75). And the best part is, anyone who blows their own mug gets deals and discounts at select bars around town, including New Albanian Brewery, Bluegrass Brewing Co., Derby City Espresso, Cumberland Brews and Nachbar. For more information, go to louisvilleglassworks.com. Happy blowing!

Beware the flying beads and frisky leprechauns this Saturday, as the 36th annual Ancient Order of Hibernians (AOH) St. Patrick’s Parade rolls down Baxter and Bardstown in the Highlands. This year’s theme is “My Wild Irish Rose,” and Molly Malone’s owners Tadgh O’Callaghan and Donal Ryan will serve as the grand marshals. More than 100 floats will make the trek down the corridor (usually from Phoenix Hill to Mid-City Mall) starting at 3 p.m.

Also, on Thursday, AOH sponsors the annual “Blessing of the Keg” party at O’Shea’s starting at 6:30 p.m. Expect to hear “Danny Boy” a few dozen times from the Derby Boys, and enjoy a pint or eight of the BBC Bourbon Barrel Stout.

Since St. Patrick’s Day is on a Tuesday this year, I plan on getting all the partying out of my system Saturday. And this year’s goals are lofty: Stay away from that goddamn green beer; don’t curse in front of children; don’t get kicked off a Tarc bus; and don’t pass out before 8 p.m.

Need a reason to drink today? Commiserate with me at barbelle.leoweekly.com