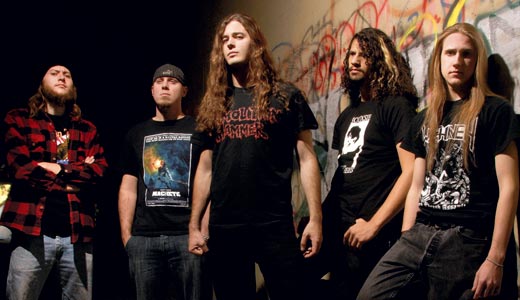 At first glance, California’s Warbringer encapsulate heavy-metal stereotypes in a way unseen since “This is Spinal Tap.” They are long-hairs, and their MySpace page incorporates steel rivets and a bright red pentagram. The cover of their Feb. 8 release, War Without End, features a tank steamrolling over a floor of skeletons as what appear to be the hordes of hell climb out of a nuclear war in the background. Warbringer got their break when a label head went to see a show headlined by L.A.-based thrashers Fueled By Fire and left more interested in the opener. Warbringer plays Uncle Pleasant’s (2126 S. Preston St., 634-4147; unclepleasants.com) at 7 tonight (March 18). Cover is $15. Vocalist John Kevill delved into the details of Warbringer’s sound and schedule.

LEO: What separates Warbringer from other thrash metal bands?
JK: We’re definitely very rooted in thrash, but I wouldn’t call ourselves a strict, 100-percent thrash band. We’re not terribly modern sounding. It’s a mixture of that and the more Slayer-derived form of thrash and some old death metal and some classic heavy metal, like we could be out of the ’80s, but more early ’90s than anything. We don’t have a lot of repetition. Everybody tells me I have a strange accent, and I suppose I do, and that brings a different quality to the vocals. We absorbed parts from all the heavy metal we listen to. It’s complete head-banging music.

LEO: How can a thrash band moving under the mainstream radar survive in 2009?
JK: We certainly don’t get any money from it. We manage to survive on the road and make enough money from that so we can take care of ourselves well enough. We’re building it up, because nobody buys records anymore, and we don’t really see any money from record sales, either. The hard part is just being away and touring all the time, because that’s what we’ve got to do. Being in a metal band is very much a live thing. I think we did about as many gigs as any other band on the planet last year, 200-something shows in 2008, and we’re probably going to do a little more in 2009. I need to really start wearing earplugs.

Music ’Cast
Darren Rappa from VRKTM debuts his new project, DR Country, this week with a show at The Lounge. He joins us in the LEO offices. Listen at Bluegrass Catastrophe, bluecat.leoweekly.com.