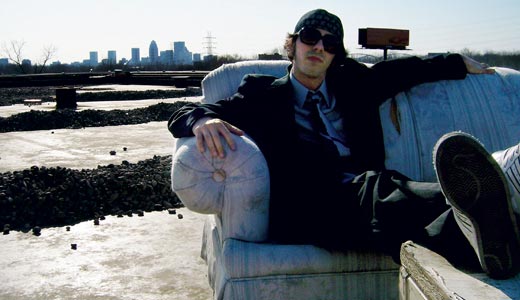 From the street to the wall, The Daveer does art his own way. Since 1996, the self-taught graffiti artist has offered his drawing and painting skills to the street.

But he went straight, as it were.

Working not only after midnight, his art can be seen in commissioned murals all over the city. When one member of his crew gets a job, they all jump in. From Fourth Street Live to a live art display at the Forecastle Festival, The Daveer, as he calls himself, provides accessible art to the city.

“I just love painting out there. Canvases are fun, but then you have to go through the task of trying to sell them,” he says. Having a subtle impact on people is a perk of public art. “People don’t have to go into a gallery to see art, they can see it where they are, every day in their life.”

Making art accessible to the community has always been a part of The Daveer’s satisfaction as an artist. Inspired by the First Friday Trolley Hop, he and his friends began coordinating an underground art show at a friend’s apartment on Clay Street, dubbed “Clay Buffet.”

The group hasn’t missed a month in five years. An open event for anyone to showcase, it sidesteps the intimidation new artists might feel with galleries, he says. “Seeing new artists helps others to find inspiration. They can see the progression of artists and realize they can do it, too.”

Although he likes to showcase his work and mingle with other artists, gallery shows don’t satisfy his creative impulse.

“I get to paint for me and my enjoyment, then I get to walk away and go start something else,” he explains. Persistent without regret, The Daveer creates art that speaks to him, not anyone else.

Having never had an art class or formal lesson, he shifted to canvas on a friend’s recommendation. During the last five years, he has experimented with spray paint using freehand and original stencils created from scanning his images into a digital format. Then he layers colors, making detailed touches with markers and, every so often, a paintbrush. The fleur de lis is a common theme throughout his work — they can be found melting, exploding and gleaming on a vivid pallette of colors.

While graffiti is what he prefers, experimenting with the illustration of animals is his new challenge. Starting with a giraffe, commissioned by a friend, and a large squid at a live event, The Daveer decided to explore the animal theme further with his new series.

“I wanted to see bright colors, cartoony-like animals and just something that makes people smile when they see it,” he says.

The opening for his new work at the Highlands Taproom will include a live-art performance by Los-1ne of Makeshift Designs, and music by local hip-hop group Skyscraper Stereo. Having performed at several underground art hops, showcasing The Daveer’s work fits with the vibe of the group. The monthly Skyscraper Saturday event, held every fourth Saturday at the Taproom, features an artist doing live art and the opening of a month-long exhibit, although The Daveer’s will only be up this night.

As for the name: While The Daveer would prefer to keep his identity hidden for obvious reasons, he says the name came about because he ran with a handful of people with similar names, so it’s like a variation on a theme.