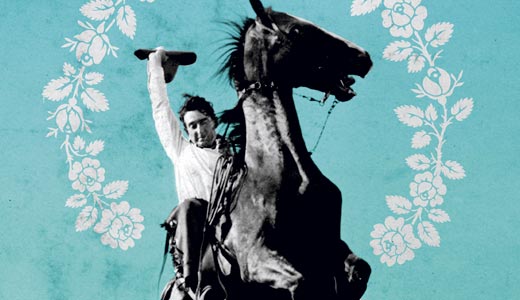 Flyering, a tactile sport in my day, has been too quick to recede into the same sort of kitsch as vinyl — indie nerds blathering about having a physical thing, right there in their hands, or the warmer sound. Now that a physical flyer (henceforth interchangeable with “poster” for this article’s purposes) is likewise no longer necessary, it is susceptible to the same kind of ineffable value argument — and hey, that isn’t without its truth.

Shows held a lot more weight when you couldn’t click more info to go to the thing’s Facebook page, usually a bare-bones affair with a date and time. Whether it’s cut and paste with a gratuitous amount of copier effects (inverse button, anyone?) or a professional multi-color screen print, flyers hold a mythological kind of significance, a kind that needs to be celebrated. This is what the Kentucky Museum of Art and Craft had in mind with its newest exhibition: “Gig Posters: The Art of Contemporary Music Promotion.”

The pictures on flyers never tell you much about the show itself (one-eyed skulls with tentacle tongues, an elephant trudging across a blue landscape), but at their best, they tell you more about the spirit of the band. For example, in this exhibition: a graphic of two identical records pulled halfway out of their sleeves for Beck, presumably ready to lay down on his two turn tables before he grabs the microphone; a lone giraffe sniffing a streetlamp for Animal Collective, highlighting their organic approach to the most analog of sounds.

This kind of visual-art-to-music affinity is easier to attain with larger acts, where the artist already knows what to expect from the band. Not surprisingly, this is what the show focuses on. You won’t find any made-with-your-butt-at-Kinko’s flyers here, even though that might be more interesting in terms of local culture. Trust me, you want to see flyers that remain relevant long past the time of the event they promoted.

In the worst cases, flyer art serves no other purpose than to lend the show an idea of cool in whatever arena the show or band exists, a kind of red herring used to knock at your cultural sensibility and goad you into going, or wanting to actually grab the thing — and hey, what’s so wrong with that? As pop art, that is a success, so in this show, we see many cases where the awesome quadruple screen has absolutely nothing to do with the bands listed next to it.

Flyers hold the underlying assumption that the show was worth someone’s time already; that this event, like the invitation to the magic theater in “Steppenwolf,” is a real thing that deserves your attention, that it isn’t just another line of weightless digital text on the screen. Images give power; they tell you what the text can’t. And this is how they remain relevant, not just because they are on pieces of paper and therefore real things, collectors’ items and not jpegs, but because humans attach significance to tactile mediums. We can’t help but admire the inherently desperate act of flyering, of how far a group of people will go to decorate and lend significance to one act, a real event in time.

And this returns us to our indie nerd, that real thing in my hands sentiment of his, the desire to hold onto and own a little piece of something otherwise intangible, a representative visual of an out-of-the-ordinary place in space-time.

I suppose flyers have now reached that point where they are either legit or outdated enough to garner an art show. Some flyers may have earned it — are above average, can be of significance because of the show they heralded or the above-average art they hold. This show seems to assume that only the large bands who give artists permission to art (verbed!) around their name deserve the extra wall time and really, this works out pretty well. The quality never wavers here with works from big names like Gary Houston (The Donnas, The Decemberists, The Flaming Lips), as well as local talents like AngryBlue and David Brooks, who have been such a large and important presence in our fair city — and in AngryBlue’s case, been around for a good long time.

A “flyer art show” may on some level be an invitation to “check out my 7-inch collection,” but none can deny the power of the idea of cool that keeps flyers afloat in the realm of pop-art (which is still a legit art form, last time I checked). So tuck yourself into those skinny jeans and waddle over to the KMAC for this celebration of a disappearing art. In conjunction with the show, Ron Jasin will be there doing one-of-a-kind silk-screened posters to grab you by your pop-sensibility and make you scream: Flyering is still relevant, dammit!