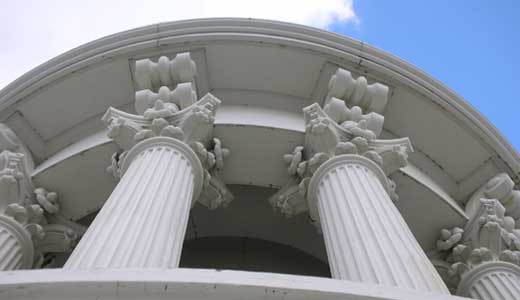 I am chronically tardy. And in this instance, I was a couple weeks too late to witness the historic inauguration of President Barack Obama.

But I must confess — I am not the least bit upset about that.

Because in addition to having a problem with punctuality, I also am not a fan of crowds (particularly crowds that exceed a million people, regardless of how polite), which is why my recent post-inaugural trip to Washington, D.C. was just perfect by my standards.

Having lived in the nation’s capital for nearly four years, the monuments, the history, the spotting of politicians at local watering holes, the presidential motorcades (read: traffic jams) lost their luster a long time ago.

But one hallmark of D.C. that continues to leave me awestruck is the United States Capitol. Whether traipsing through the bowels of the building as a reporter or merely riding by in a cab, a sense of privilege — and dare I say patriotism — never failed to overwhelm me.

So imagine my excitement when a friend who works at the Capitol arranged for me to take a tour that is usually reserved for friends and family of Congress members. As the proletariat tourists shuffle about the ground floor of the Rotunda, photographing busts of important old white dudes and paintings depicting pivotal moments in U.S. history, I would make my way to the rooftop of the dome.

In preparation for the great climb, I first stop by the Senate cafeteria for some much-needed sustenance and hydration. Determined to capture photographic proof of one of my local elected officials chowing down, I am disappointed upon seeing numerous signs warning that taking pictures is prohibited in all Senate food areas. Apparently one too many politicians got caught with ketchup on the chin.

After stocking up on water I set out for the tour, but not before security searches my bag and proceeds to apologetically toss my recently purchased water into the trash. Clearly they do not understand (or care) how many glasses of wine I had last night, which by the way is not recommended before trudging up 18 flights of stairs — that’s 353 steps to be exact.

One more minor detail before embarking on my journey: I must sign a lengthy waiver absolving the federal government of any responsibility in case I die during my ascent on the exclusive — and as it turns out potentially fatal — dome tour.

With a stroke of the pen I begin my vertical jaunt, starting with a spiral staircase that leads to an outdoor area resembling the hull of a ship. At this juncture, a sign indicates the remainder of the trek is strenuous, cautioning: “If you suffer from acrophobia (fear of heights), do not go on this tour.”

Continuing up an iron staircase that snakes back indoors, I attempt to jot down the fascinating facts my tour guide rattles off, but it’s tough to keep up the pace while writing, holding onto the railing and remembering to breathe. The most intriguing morsel of knowledge is the fact that the Capitol dome is actually made of cast iron, although it appears to be built of stone like the European buildings on which it was modeled. In fact, the massive columns encircling the dome are purely decorative, adding nothing to the building’s structural integrity.

But hey, it looks good.

We make our way to a balcony overlooking the grand Rotunda. Although I am not acrophobic, I become lightheaded and sweaty-palmed as I peer over the railing at tour groups milling about like packs of slow-moving animals. The guide informs me that sound rises and does not fall, meaning we can clearly hear the chatter down below, yet they cannot hear our echoing voices. (The acoustics are unbelievable and I desperately want to belt out the first verse of “Don’t Stop Believin’,” but I would hate to be ejected from the Capitol before finishing my tour, and so I refrain.)

Finally, we make the final odyssey to the top — passing an emergency defibrillator on the way — and swing open a heavy metal door that leads outside.

A balcony encircling the dome allows me to take in a panoramic view of the region: the Washington Monument and U.S. Supreme Court, the Potomac River, the remnants of the stage where Obama was sworn in two weeks earlier. It truly is magnificent, well worth a strained hamstring and limited mobility for the remainder of my trip.

Limping away from the tour, I visit the Capitol gift shop, where it just so happens they are having a blowout sale. If you spot a LEO staffer enjoying a cold beverage from a U.S. Senate coozie or sippie cup, it was courtesy of me.