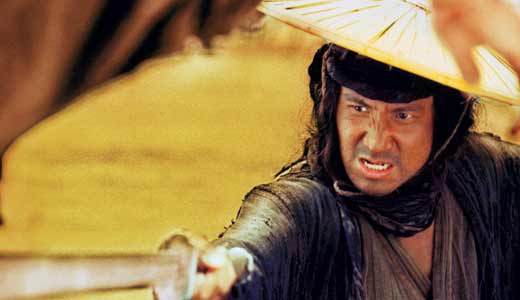 Director Wong Kar Wai’s epic Kung Fu masterpiece, now digitally restored and re-edited by Wong, and re-scored by cellist Yo-Yo Ma. Leslie Cheung plays a brokenhearted man living alone in the desert, a legendary figure who brokers deals between skilled swordsmen and those seeking vengeance. With Maggie Cheung as his lost love, this is a rich stew of sensual landscapes and larger-than-life characters, with some of the best fight sequences ever filmed. We could have done without the colorization, but otherwise this is a perfect reissue.

IN THE ELECTRIC MIST

Yeah, this soupy Louisiana bayou murder mystery stars Tommy Lee Jones as the requisite detective and John Goodman hamming things up as swamp-mobster “Baby Feet” Balboni, but the real reason to check this out is the soundtrack. The incomparable Buddy Guy lays down some of the best Cajun/blues tracks ever heard, anywhere — and appears in the film as a character named “Hogman.” Oh, did we mention Levon Helm from The Band, a moldy corpse and the Confederate Dead? One big-ol’ spicy gumbo of fun with Peter Sarsgaard, Mary Steenburgen and Ned Beatty.

A trio of episodes from the Nickelodeon kids series. A pair of human twins and their space-fairing Penguin buddies have wildly mild fun saving the galaxy while learning lessons in patience, diligence and compassion. Needs more phasers, but what doesn’t?

A new kid-centric franchise based on the wacky Jim Carrey character. Here, Ace’s 12-year-old son tracks down missing pets — including a feisty gator — until his mom is arrested for stealing an endangered baby panda! Chaos ensues as he and his two best buds go searching for clues. Watch for Ralph Waites from “The Waltons.”

ADJUST YOUR COLOR: THE TRUTH OF PETEY GREENE

Don Cheadle, who won awards as radio personality Ralph “Petey” Greene in the excellent “Talk To Me,” narrates this doc on the life and times of the real Petey Green. We recommend both. (And watch for Don in “Iron Man 2” due out in 2010.)

Let’s see, if you like Japanese schoolgirls, T&A, gore and really, really bad movies, then we’ve found a minor gem just for you. In this sequel to 2006’s “Zonbi jieitai,” a gaggle of comely and lithe jailbait swimmers get tired of taking showers and being stalked and eaten by zombies, so they arm up, strike a pose and … oh, we can’t spoil it. Too much fun.

Hopelessly smarmy love-letter to the home continent of stars Nicole Kidman, Hugh Jackman and Bryan Brown. Great vistas and sweeping grandeur completely drown whatever story they were trying to tell. Nicole’s going to have to get nekkid if we’re expected to sit through crap like this.

A better-than-it-has-to-be “Ring”-inspired outing from Austria. A group of teens are stalked by a killer who sends text messages that say, “In 3 days you’re dead.” Not bad.

I’VE LOVED YOU SO LONG

Big, weepy French/German chick-flick arthouser starring Kristin Scott Thomas as a former doctor, free after 15 years in prison for a horrible crime. Shattered and frail, she goes to live with her estranged sister and they “embark on a painful but redemptive journey back from life’s darkest edge.” Just sounds entertaining as hell, don’t it?

Sissy Spacek leads an eclectic cast in this Southern family drama about an estranged mother and son. With Troy Garity, the gorgeous Rebecca Romijn, singer Dave Matthews and Drea de Matteo. Is it just us, or do the movies really suck this week?

A weird, if likeable little comedy starring Joey (Joe’s kid) Piscopo. He plays an average guy, bumped out of his usual weekly routine only to discover a different world. And for two short hours in that world, he can do anything! But can he find love and make it last outside of that window? Louis Mandylor and the mysterious George Wendt (Norm from “Cheers”) may hold the key.

“Animated” version — with limited motion, voice and sound — of the most successful and celebrated graphic novel in history: 12 chapters on two discs, six hours of caped chaos, and drama overseen by illustrator Dave Gibbons.

Nick Cannon and Paul Dano star in this morality tale showing how America’s love of guns rips the fabric of our society and dooms today’s youth to an escalating cycle of violence. It’s nice to see Nick taking on meatier roles.

A new full-length animated treatment with Keri Russell providing the voice of Princess Diana/Diana Prince and Nathan Fillion of “Serenity” as Col. Steve Trevor. Other luminaries include Alfred Molina, Rosario Dawson, Virginia Madsen, David McCallum as Zeus, Marg Helgenberger and Oliver Platt. The animation is minimal, but the story is solid and harkens back to the original All Star Comics days, with terrific historical bonus material.

THE HILLS: THE COMPLETE FOURTH SEASON