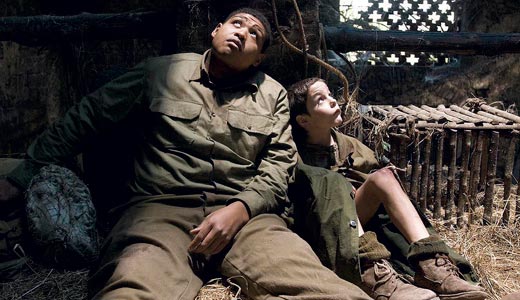 This has been hailed as the greatest war flick since “Saving Private Ryan.” Don’t know about that, but this occasionally evocative drama from Spike Lee is a masterful bit of storytelling — in parts — thanks to James McBride’s novel and screenplay. The opening hook — a postal worker shoots a customer in the face without warning — is, in itself, head-and-shoulders above anything seen lately. This segues into a kind of disjointed WWII flashback about an all-black division lost in Italy after saving a small boy. Not the manifesto that Lee seemed to be shooting for, but entertaining.

Holy crap. Richard Gere and Diane Lane from “Unfaithful” reunite in the most estrogen-saturated chicker-flicker ever made. Based on the weeper novel by Nicholas Sparks (“The Notebook”), two unbelievably sappy grown adults — she unhappily married and conveniently “watching” a seaside inn for the weekend, he hoping to bond with his estranged son and conveniently the only guest there — quite literally act up a storm while middle-aged women bawl in the balconies. Puh-leeze. It took five producers and seven assistant directors to make this?

Julianne Moore is the only person left with sight after a mysterious disease renders everyone blind. Based on a novel by José Saramago, who apparently hopes no one has ever read John Wyndham’s excellent “Day of the Triffids.” Enrich your life: Read the Wyndham book and then see either of the theatrical versions. BTW: A new BBC “Triffids” miniseries is coming out in August.

A wildly entertaining and very popular kung fu quester from Thailand about an autistic woman with killer martial arts skills learned largely from watching TV. She decides to help her sick mother by collecting the money owed her family by ruthless gangs. But at the end of the road lies her greatest challenge: her Yakuza father. Great stuff.

A damned good little drama about two single moms, desperately trying to survive in a rat-hole town situated on the St. Lawrence River between the United States and Canada. When the river freezes over, it’s an opportunity for much-needed smuggling income. But what to do about Michael O’Keefe, the only law for miles? Worth your time.

Another hyperactive, too-hip visit from those colorful displaced denizens of the Bronx Zoo. This franchise has become quite the juggernaut, spinning off a Nickelodeon series, music videos, games, books and more — most of it represented in the accompanying bonus goodies. Silly, harmless, flashy fun that reminds us at times of good ol’ Chuck Jones. Enjoy.

Samuel L. Jackson and Bernie Mac … do we really need to go on? These two vets play a former soul-singing duo that once played the Apollo Theater. But that was 20 years and one bad breakup ago. Now they have a chance to reclaim their former glory (and make some much needed cash) in a tribute performance. Can they not kill each other until after they get the check? With Sean Hayes, Jennifer Coolidge, Isaac Hayes’s last screen appearance, John Legend and more.

TALES FROM THE DARKSIDE: THE FIRST SEASON

This oft-maligned horror/fantasy anthology series from the ’80s had some good scripts — particularly those by Harlan Ellison, Stephen King and Clive Barker — but suffered from bad scheduling. So it was a joy to watch all 23 episodes gathered together and see so many classic movie stars teaching today’s best actors (then teenagers) how it’s done.

A look behind the walls of Yokiro, once Japan’s greatest Geisha house, through the eyes of Momokawa. Sold by her parents at age 12, she rose to become glamorous and celebrated, living a life filled with passion, intrigue, war and turbulence. Long out of print, this welcome DVD features the original Japanese sound and language tracks. Excellent.

They had us at the sexy cover art featuring a red Stratocaster and a naked Saffron Burrows, but the real treat is her performance in what could have been a real downer of a movie. She plays a woman who learns she has only two months to live. But rather than let it destroy her, she becomes a force of nature, determined to make the most of every second. A wonderful fantasy from director Amy Redford.

THE LODGER: A STORY OF THE LONDON FOG

Alfred Hitchcock often claimed that, while he had made others, this was his “first film” — and you can see why. All of his trademarked flourishes are there, including his clever cameos. One of the best Jack The Ripper tales ever made, with Marie Ault as the landlady who comes to suspect that her new lodger has evil designs on women, especially her beautiful daughter (played by an enigmatic actress known only as “June”). Too rarely seen.

Oliver Stone looks at The Shit Heard Round The World. Was George W. Bush the dumbest motherfucker ever to wipe his ass on the Constitution, or was he truly an evil, ruthless, power-mad genius? Frankly, we don’t care, as long as he stays gone. Good little movie.

If you’ve never seen this startling series from Animal Planet … what the hell’s wrong with you? While the Japanese continue to hunt whales openly despite a worldwide ban, a brave band of conservationists puts their lives on the line to protect them. Open warfare erupts — including boat-ramming, gunfire, explosives and hand-to-hand combat — while cameras roll.

ONE FOOT IN THE GRAVE: SEASON 6